For me, that field was a beaten up, run down former tennis court tucked away between the magnificent deodar and handsome Indian Chestnut tree and sturdy Himalayan Oak and serene maple trees. A little piece of heaven where in days of yore British, American and Canadian missionaries spent sunny summer afternoons playing tennis and rounders but which by the time my buddies and I took over had withered into a rough, mossy mess of dilapidated cement and dirt. It was perfect.

It was here that I established and furthered friendships that have lasted years and will always do so. A friend and I, with help from my father, arranged for a crease at either end of the field be painted in thick, green paint. We measured the crease with tape, and ensured the specifics were to the T. We measured the length of the pitch, never mind that we were bowling on aging concrete and moss. We had the grass cut; the stinging nettle and dock leaf in two corners, square leg and long-on, the clovers along the wall that ran from second slip to fine leg. When it rained, we mopped up the muck and slush. A few times we used gunny sacks to absorb the muck and laid them down like mat, three feet from where we batted. The rains didn't deter us. Neither did the snow; one winter my oldest buddy - he drove up from Dehra Dun just to play cricket - scraped up the snow and bowled in the freezing cold until we were called inside for Christmas lunch.

We played eight and ten and twelve and fifteen-over matches. We played 'Test' matches. We played one-on-one matches. Sometimes I bowled alone to single stumps, offspin and medium-pace. Many, many weekends were spent on that field, from eight am to six pm, often with hardly half an hour for lunch. Sometimes I skipped lunch. Many times friends groaned that they needed to eat more than raw Maggi and lemon squash for lunch. On once return home from college, I tried to wrap a tennis ball in black electric tape like my Pakistani friends had done so skillfully in college in the Midwest. It was an epic failure, because the tape wasn't sturdy and repeated hits along the rough, grainy surface and through thick and wet grass ruined the stuff. The most fun was had when I discovered the MRI cricket tennis ball, a hard white ball somewhere between a tennis ball and a cricket ball. It looked like a tennis ball but was much harder; if it hit you, it bruised. It was a great ball to bowl fast with, no matter how dodgy your action, and when you struck it firmly the ball flew. Good fun.

During the summers we welcomed visiting guests at Oakville and beyond, fathers and sons alike. We had many last-ball finishes - Atul, sorry for all those sixes - and once smashed a window of a study. How many balls were lost on top of trees and in their branches and down the khud over extra cover or over third man and in the garden or over the roof of the Big House, lost forever to the mountainside, I cannot begin to recall. 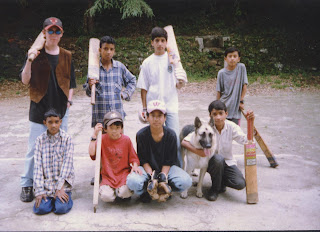 It was here that little Siddharth, whom a few of us doubted would every grow beyond four feet, played the paddle scoop long before Dilshan and McCullum. True story. We kept score in notebooks. Once summer, with help from Beth Norford, we each got white baseball caps with our names traced onto them in black ink. The Oakville cricket team was the best in the vicinity, beating teams from Char Dukan and the Cantonment both home and away. We all lived for cricket.

Left-handed or right, crooked action and smooth, hopeless fielder and natural athlete alike, we were a band of brothers. We fought, we cursed, we laughed and we celebrated. Tashi and I were fierce rivals; Tashi fancied himself as the best batsman on the team as did I. He was more technically accomplished, while I could hit a long ball. I had a tough time figuring out his whirlwind helicopter-like action, which Tashi never shied away from reminding me whenever I played and missed and got out. I liked batting with Gautam and Raghu. I enjoyed pinching singles with Gautam and standing at the nonstriker's end and marveling at how cleanly Raghu could hit the ball straight back over the bowler's head. Paras was capable of bowling fast, and his full deliveries with the MRI were the closest to Waqar Younis-like toe-crushers as we could imagine. Vinod had an action similar to Murali; Sanju had his patented karchi shot; Balli was the only left-hander for miles and had one shot, ala Robin Singh - the mow across the line.

My friends from Woodstock made regular appearances: Ronjoy, mostly, and John and Atul and Akash (seldomly). There were weekends when Ashis came up from Hostel, and I remember his elation and subsequent harassing of Ronjoy after he had him caught by Helmet, after a miscued slog - first ball, mind you - came down through the leaves and branches of the maple tree and somehow stuck in the little tyke's hands. On another occasion Balli managed to tick off Atul with his sledging, and scampered up the hillside with an irate Atul hurling stones at him. Great times.

Others also featured in our matches over that four-year period: my father, Momo, James Conrad, the mad Sardar who drove Atley Brar's jeep, to name a few. 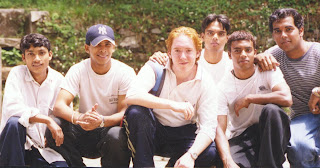 One summer, John and I returned from the States during our college years. Ronjoy met us at the airport in Delhi and we drove through the night, picking up Atul and Vijay Roy outside Dehra Dun and getting 'the gang' together at Oakville. I proudly took out my handicam and had it set up to record me facing Ronjoy after two years. To my embarrassment and his elation, Ronjoy yorked me first ball.

Another night, the last before I flew back to the USA for college that same summer, we arranged for lights to be brought up from the bazaar. We had two installed, and they provided sufficient lighting for us to play from nine pm to 2 am. We had enough people to make three teams of six, and had a tri-series. It was an unforgettable night. The lighting behind the bowler was poor, and to spot a green tennis ball from out of the dark was damn tough. I remember telling myself to bat like Dravid or Steve Waugh on a bad wicket, and took guard a foot outside the crease. It worked, and twice that night I steered my team to victory after the rest had fallen in the dark. There was always last-man-batting at Oakville.

Today that field is used only by three large bhotia dogs, their own playground where they can chase each other or imaginary intruders and chew at whatever they happen to find. The grass is much higher, the cracks much larger, the mud even more prominent - especially now, during the monsoon - and there is a fence around it. But that has not changed my view of what was my field of dreams.

Ronjoy and I recently returned to Oakville and got an hour's play in during the rain. Sure, we were stiff and not as athletic, but it was as if no time had elapsed at all since our last visit here together four years ago. He still beat me many times with pace and spin and I managed to pitch a few on the right cracks to surprise him.

Oakville's tennis court will always remain my field of dreams, as I'm sure it will be for many of the friends I've mentioned. Maybe some day our children will come here and play cricket. I can only hope that they too will one day play the way we did, on warm days and wet, from morning to evening. Thank you, Oakville, for all the memories.

Unknown said…
It seems right out of a storybook. Beautiful memories, beautifully written. And I have to admit, makes me a teeny weeny jealous.
9:15 PM

Anonymous said…
to oakville jammu bhai....cheers! thanks for making me relive those blissful days. soon we shall gather again, under the merciful sun, diving fearlessly on the ever so green grass with unlimited supply of popcorn and lemonade.......score kaun rakh raha hai bhai?
9:03 AM

Paras said…
While reading this,i was actually into the cricket match at Oakville. Those were the days of cricket craze. Every match had its importance. Good description of all that Jammie!!
7:48 AM

Paras said…
While reading this post,i was actually into a match at Oakville. Those were the days of cricket craze. Cannot forget a single day at that field. Good description Jammie!!
7:52 AM