- July 25, 2011
A mesmerizing fifth day at Lord's awaits. England need nine wickets, India need to bat three sessions to escape. Gambhir in some doubt following a blow to the elbow, Tendulkar unable to bat until half an hour after lunch or till five wickets are down. Dravid, yet to be dismissed in this Test, and Laxman, the man for a crisis, at the crease together, both having made it to the thirties before stumps on day four. The 2000th Test is set up amazingly.

Today, Dravid and Laxman will walk out for India as they have done so creditably and so often. Both at the end of their illustrious careers; Dravid, the second-highest run-scorer in Tests ever, a legend of the modern game and indeed of all times, and India's most dependable batsman and best No 3. Laxman, who summons his inner legend when the chips are down. The pair will be up against Anderson, Tremlett, Broad and Swann, England's best attack since the summer of 2005. Yet again, a Test to be saved, a precarious situation to be turned on its head like so many times before. 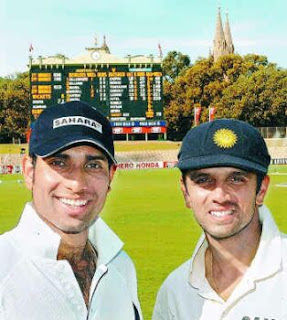 In the best overall partnerships for a pair, Dravid and Laxman stand at tenth place. In the overall partnerships records for India, this pair unsurprisingly features prominently. For most century partnerships for a pair, Dravid and Laxman are at 16th place overall (the Dravid-Tendulkar pair is top of the pile). In the list of highest partnerships for all wickets, Dravid features at 13th (410 with Sehwag against Pakistan) and 22nd (376 with Laxman against Australia). In terms of the times that Dravid has batted with Laxman, the numbers show us that this pair is due a big stand; their last significant association was the 175 they put on in Sydney back in 2008.

There is no doubt that Dravid and Laxman are partnership men, an able couple who work well in partnerships, infusing much value and substance. They know such situations, they have forged most of their partnerships under such pressure, and now, in the dusk of their careers, Dravid and Laxman face a very, very tough assignment. If they succeed, Dravid leaving and poking and nudging and Laxman cutting and whipping and blocking, fans of Indian cricket and Test cricket will be treated once again to sublime batting and displays of patience and resolve, and we can all raise our glasses to two fine cricketers and men.