Skip to main content
- July 30, 2011
Better days of Test cricket are hard to come by. This is what we live for, the kind of battle we flock to the grounds to, put aside work and other daily activities and chores for, skip work for, the reason some of us become sports writers. Those of you who happened to be at Trent Bridge to day, I envy you.

The first session, to India. Dravid and Laxman, Indian cricket's third best partners of all time, but who had 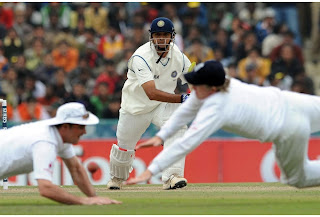 never batted together in the first over of an innings before yesterday, once again seeing their side out of tricky spot. From the rigor and caution of the first evening, to the confidence and panache of the second morning. Laxman, the aggressor, cutting and driving and pulling, supple of wrist and keen of eye. Dravid, the indefatigable, pushing and leaving and tucking and dabbing and steering. Laxman, seeing the ball and judging the length early, playing late and punching through the line and on the rise. Dravid, quick to come forward and then deflect the ball with soft hands. Two artists, Picaso and Warhol, coming together to paint a canvas of luminous quality.

The morning came alive with four consecutive boundaries, two each to Laxman and Dravid either side of two overs. Ten boundaries in the first hour, six to Laxman, all off James Anderson. Laxman, pulling superbly, playing the shot with which he was dismissed in the second innings at Lord's with purpose. A whiplash cut, a flowing drive, two open-faced steers and two purring pull shots. Nothing violent.

No movement as on day one, and the arc behind point proved especially productive for Dravid and Laxman. Dravid, what more to say? One of his best centuries, up there with Adelaide and Trent Bridge (2002) and Rawalpindi, admitted by the man who witnessed such epics at close range, Sourav Ganguly. Every run was sweated over and carefully planned.

Laxman, chatted up and needled by the fielders. He and Dravid competing with each other, a lovely engagement. When one drove, the other attempted the same. When one steered wide of backward point, the other, rubber-wristed, placed the ball out of gully's reach. In between, testing stuff from Stuart Broad, who but for one delivery in the first session bowled only at Dravid. 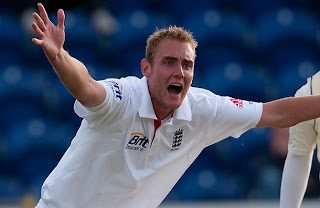 And then, when it seemed Laxman would ease past his highest score of 74 in England, he fell, nicking a gem of a delivery from Tim Bresnan. Soon after it was Tendulkar, playing a poor shot. Trouble? Not quite, as Dravid settled the nerves by guiding four to third man to raise his fifty, off 131 balls; the runs to deliveries ratio reflected his graft. Dripping with purpose, Dravid shook of a blow to the right wrist and with Yuvraj, out after Raina sliced a wide ball to point - India still 82 behind at that stage - formed a sturdy alliance. Swann was attacked, clattered for three fours in one over. Trott fell to the ground attempting a save, hurt himself, and went off the field. Andrew Strauss once again misused a review. Safely, India took tea.

And then, England's man of the moment, Broad. Bowling fast and hard and with gusto, knocking India back. Again the match swung, and how. Dhoni, Harbhajan and Praveen gone in three deliveries, a fantastic hat-trick for Broad. From a position of control, and one from where visions of a big lead loomed, India slid from 267 for 4 to 288. England's spirits soared, India's sagged.

There was Dravid, watching in horror. And so he threw bat on ball, scampering to a splendid century - his third in the last five Tests - and finishing on 177. A magnificent effort, but a lead of 67. India had the final word, however, with Ishant Sharma removing Cook cheaply. England 24 for 1 at the close, behind by 43.

A day of rock climbing. India scrambled a couple of meters, then pulled back before regaining balance and moving forward again through Dravid and Yuvraj. The biggest slip came in the final session, when Broad grabbed five for five in stunning manner and England's resilience came to the fore. The self belief was immense, the joy of such a stunning comeback palpable. Ishant's strike at the end of the day gave India reason to smile, and now they will strive for some dragging down on the third day. The scales tipped often, and this match is tantalizingly poised after another gripping, low-scoring day.