Skip to main content
- October 19, 2010
County cricket attracted me even before I had seen a match or knew the names of players. It just seemed like the breeding ground for world-class Test players. The Aussies were all over in England playing, Gavaskar had played over there, Yorkshire had signed up Tendulkar, albeit with relatively unsuccessful results, and it was where Botham and Richards struck up a lasting friendship. Visually, initially from the odd photograph in Sportstar or a grainy black-and-white snap in the dailies, and later once cable television started relaying highlights, the cricket was pristine. The grounds, with names so decidedly Edwardian, dotted with white picket fences, the players looking dapper in their sweaters and starched whites, collars turned up sharply as they stood at slip awaiting a catch or playing a hook shot.
County cricket, and in particular their major venues, had been honored in prose and poetry and added to the fable that was English cricket. Cardus, Arlott, Fingleton, Robertson-Glasgow. Lord's, Trent Bridge, Old Trafford, Headingley, Edgbaston, The Oval. I wanted to go to these grounds and soak in the history.
From late April to early September, England was the place to be, as far as I was concerned. 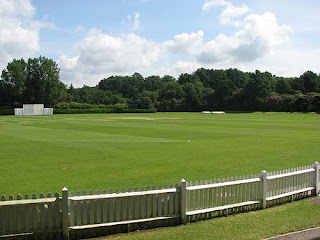 Briefly, in 1998-99, Star Sports showed occasional footage of the county season. I remember watching the Holliake brothers bowl in tandem for Surrey; Graeme Hick batting at Worcester; and a young Yorkshire offspinning-allrounder, Michael Vaughan, whom my father said had the potential to play for England. Sure enough, Vaughan was called up for the tour of South Africa later that year and, batting at No. 6 with England a shocking 2 for 4, easing the nerves somewhat with an assured 33.
Landing in London for the first time, I peered eagerly out of the window (I had specifically asked for this seat) and counted the number of cricket strips I could pick out from above. There seemed to be so many. Having previously only watched cricket at the Wankhede and Mohali, the greenery was overwhelming.
The first county game I watched live came after I'd witnessed both semi-finals of the 1999 World Cup - a one-sided affair at Old Trafford, and arguably the best ODI ever, the tied match at Edgbaston - was Surrey v Lancashire, at The Oval, day one, in what was then the PPP Healthcare County Championship. As my father and I paid for our tickets and entered through the turnstiles, I remember being overawed at how lush the grass was. And then by how easy it was to get a seat – the ground was virtually empty – and how accessible the players were.
Mike Gatting, suited and booted, engaged in banter with fans from the players’ enclosure, which was not 10 feet from where we sat. The players signed autographs and shook hands with spectators as they walked back from lunch and tea. I remember big Andrew Flintoff walking out to bat and being bowled for a duck. I remember a spanking pull shot by Mark Butcher off Peter Martin, followed by a square cut off Muralitharan; Murali’s dismissal of Ian Ward, lbw and looking clueless as to whether to play forward or back; John Crawley, padded up and waiting to bat, lighting up a cigarette; an old man sitting in front of us with a pint of beer and score sheet on which he monitored every single piece of action that unfolded.

After that year I went to the US for college. Now there was the Internet to keep up with the scores. There were a few whose careers I would follow as closely as possible. Every day – usually behind the student supervisor’s desk at the library – I would go to the BBC site for the updates on all the county action. As the weeks went by I grew to associate initials with counties – SC Moore, SP Peters (Worcestershire); DP Fulton, RWT Key, ET Smith, (Kent); MJ Chilton (Lancashire); RL Johnson (Somerset); DI Stevens (Leicestershire); DA Cosker (Glamorgan) – and as the runs or wickets piled up for a few individuals I began following their careers closely. It was especially pleasing to see a few of these names go on to play for England: Key in the summer of 2002 and Smith and Johnson the following year. 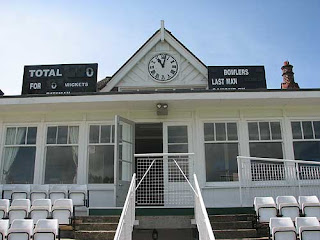 I got the chance to watch and cover county cricket – all three formats – in the summer of 2008. I went to Lord’s, The Oval, Tunbridge Wells and Uxbridge. I should have gone to a lot more grounds, but work and my financial situation were factors. I took the tube and commuter rail get to grounds; along the way I had for company a the first edition of that great anthology, The Joy of Cricket, given to me by a friend before I left India. During that summer I met journalists whom I had read and heard, as well as old-timers in the stands who shared their views of the modern game. I sat in press boxes I had once seen on television. I sat next to Mike Atherton in The Oval press box with Mike Selvey and Christopher Martin-Jenkins the only other people in the room, and Atherton turned around and asked me a question about Cricinfo, for whom I worked at the time.
The four-day game still didn’t have many spectators, but the Twenty20s did. Now there were pink shirts and pink grips, but still the game just seemed right. Now I could drink beer, and did so with a pack of Walkers crisps and the sun on my back, while watching Surrey take on Hampshire at The Oval. The players still looked dapper, their collars were still as starched as I had remembered, and the sound off the bat when someone cracked a pull was still so sweet. And that is how I will always remember county cricket.