Rooting for the rookie

- October 13, 2010
It’s always good to see a rookie do well on his Test debut. It’s especially pleasing when the debutant is someone like young Cheteshwar Pujara, who has had to put in the hard yards for some time.

Pujara hasn’t divided opinion among Indian cricket followers like VVS Laxman, Sourav Ganguly, Yuvraj Singh or even a Sadagoppan Ramesh have in the past. He came into prominence in the 2006-07 Ranji season, with 600 runs at over 50. Over the next three season he averaged 53.35, 65.56 and 82.33. His supporters bemoaned his being neglected despite a first-class average of over 60, while his detractors said he scored largely at home on a dodo-dead Rajkot track and that he didn’t score big hundreds and was a tad slow. But Pujara ticked off each of the issues his critics pointed out. He scored runs away from home; he scored three consecutive triple centuries; he improved his strike-rate; he scored in England and Australia.
When Pujara cover-drove his second delivery in Test cricket for four through cover-point, it was a shot that released a couple years of frustration. Despite the bulk of runs and having passed nearly every test needed for international selection, he had been neglected by the national selectors until very recently, when the squad for the two Tests against Australia was announced. 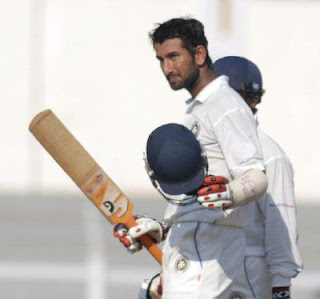 In a chanceless second-innings 72, Pujara showed that he indeed had the ability to score runs. At the end of the day, the five wise men who make up the selection panel have no more reasons to doubt Pujara’s capability. Granted this wasn’t a menacing surface or bowling attack, but the manner in which Pujara took to the bowling – having fallen to a brute of a shooter in the first dig after a six-hour wait with pads strapped on – showed he had the technique to face international bowlers.
What is certain his ability to look extremely comfortable in the middle – on Indian pitches, at lease. Against the Aussies, he played some spanking drives though the off side, and some even better cut shots. When Shane Watson pitched short, Pujara emphatically pulled him over midwicket for four to raise his half-century on debut. Two deliveries earlier he had created the angle to flick Watson’s straight delivery past fine leg. His strike-rate began frenetically and remained brisk throughout his stay.
That Pujara is indeed a contender for a middle-order berth in the not too distant future has been proved by his selection in the squad and his performance in the Bangalore Test. The selectors were criticized for taking their time to pick Pujara, but is 22 too late? Not at all. Pujara is certain to be picked for the Tests against New Zealand and though he may not get further chances this year to prove his ability or inability, he will not be banished back to domestic cricket.
His closest competitor is Yuvraj, who he replaced in the squad. That Yuvraj, since making his India debut in 2000, has been unable to cement his place in the Test middle order is a great Indian tragedy. With so much talent, he should have knocked aside one of VVS Laxman or Sourav Ganguly a while ago. It is no argument to hear from Yuvraj and his supporters that it was impossible to do that given how rich India’s middle order was. If you are that good, you kick the door down.
It can now be argued that Pujara has a stronger claim than Yuvraj by virtue of his debut performance, sharp close-in fielding, and the latter’s inability to produce big innings. Don’t read too much into a double-century in the Irani Trophy.
To stay on the horizon - for, in Yuvraj, Murali Vijay, Rohit Sharma and Virat Kohli, there are a few contenders – Pujara needs to keep the runs flowing. That should come pretty easy to him.

Saurabh Somani said…
Good one Jamie... I was gladder to see Pujara score well in this match than to see Tendulkar's double :)
Pujara should be head and shoulders above Yuvraj in the selectors book now, I hope!
4:34 PM