Of technique and television

- October 27, 2010
Indian television is great for cricket. Not if you're typing the ball-by-ball commentary for Cricinfo and an ad cuts off a bowler's celebration after a wicket, but in terms of how much cricket it shows and how consistently. Yesterday afternoon, flipping through channels, I was able to choose from highlights of an ODI between India and Australia  in Indore in 2001, another between South Africa and Zimbabwe from last week, Dravid and Laxman batting India toward victory in the famous Adelaide Test of 2003-04, Sri Lanka beating New Zealand at the Brabourne in 2006 (an ODI I happened to watch live), Somerset's facile win over Derbyshire in last season's Twenty20 Cup quarter-finals, and Matthew Wade's maiden limited-overs century against Western Australia in a Ryobi Cup fixture from over the weekend. An overdose, surely, many would say.

But flipping through every format of the game, with different teams going at it in different countries and conditions, allowed me the chance to see so many different styles and techniques within the span of a few clicks. 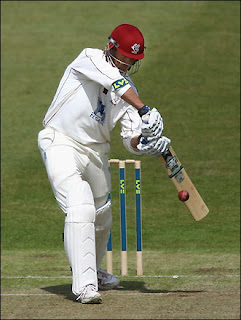 There was the masterful: a Tendulkar straight drive between the bowler and mid-on and a flick over backward square leg. There was the orthodox: Dravid and Laxman crisply driving and flicking the feared pace duo of Brad Williams and Andy Bichel, interspersed with the odd shot of a water-tight forward defensive. There was the ugly: Graeme Smith stabbing at the ball violently and inside-edging Shingarai Masakadza past square leg. There was the effortless: an in-form Hashim Amla punching length balls on the up past cover. There was the modern day orthodox: Craig Kieswetter making room and lofting spin inside-out over extra cover for six. And there was the totally unorthodox: Wade paddling a fast bowler for four and Trego connecting hard on a reverse sweep.

I've always enjoyed watching the different techniques on view, especially the more unorthodox. Sehwag and Trescothick are my two faves. They are testament to the fact that footwork counts for little when you are blessed with amazing hand-eye coordination, sweet timing, and a whole lotta self confidence. My main gripe with Trescothick's otherwise endearing autobiography, Coming Back To Me, was that he didn't allow the reader into his style of batting and how he honed it. Would have been fascinating to find out whether he was coached on his batting, or if people tried to correct his footwork. But that's another story for another day.

After Sehwag and Trescothick, the most successful current batsman not to have great foot work is Graeme Smith. How he has scored so many runs despite a problem with the moving ball delivered from left-handers - especially Zaheer Khan - and such an ungainly approach is a bit baffling, given he isn't nearly as sweet a timer of the ball as the aforementioned duo. He doesn't bring the bat down from second slip, as the coaching manuals want you to. Instead he brings it down from gully, and then relies on his wrists to jab at the ball and work it away anywhere from square leg to mid-on. He manages to keep the bat face straight very regularly as well. Its makes for fascinating viewing, especially when Smith bats for long periods. As I flipped, I came across Fleming, another left-hand batsman who didn't bring the bat down in the more accepted way, and who also looked a bit awkward at the crease. He had a higher back lift than Smith, and used to get out a lot of times lbw to left-armers, most noticably Chaminda Vaas. In that Brabourne match, the commentators were talking of how many times Vaas had nailed Fleming and, as if on cue, Fleming walked across his stumps and was out for 10-ball duck. Same routine: the bat came down angled instead of straight and as Fleming tried to stand tall and on-drive he was late and beaten by the movement. Bringing the bat down from somewhere near point once again got him in trouble.

It was a fascinating half hour of flipping back and forth and seeing a range of batting techniques. Yes, I need a life, I know.