- July 25, 2007
Okay, I’m back. A lot has happened since I last got on this page. India elected its first female President in a muckraking political poll, Tony Blair left office, Australia won its third consecutive World Cup, and Paris Hilton went to jail, and the seventh and final Harry Potter book came out.

But yeah, I’m not here to discuss all that. Saw Himesh Reshammiya’s debut film, Aap Ka Suroor – The Real Luv Story yesterday. Sold-out show at 11.00 a.m. in Bangalore, of all places. And get this, there was an auto rickshaw parked on the second to last floor of the mall, smack between an SUV and one of those fancy little cars. 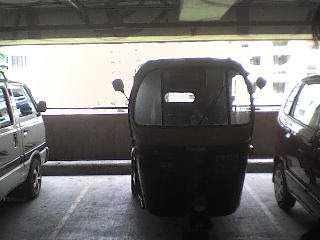 I can just see the rick driver, collar up, taking the morning off and driving through the gate, telling the security guard that he was a paying customer here to watch a film, and that like all the other customers, it was his right to park his vehicle in the space allotted. Awesome!

But yeah, back to the film. You don’t expect much walking into a picture like this, right? I mean, its Himesh Reshammiya, he of the nasal twang, the long coats, the rough stubble, and of course, the colorful caps. He never smiles, he croons about loss and pain, he sleepwalks through so many of his music videos. I didn’t read too much of what the critics wrote, but 99% of what I did come across was trade gurus panning his acting and the entire movie.

I was pleasantly surprised. This is no award-winning performance, the emotions are but scarce, and the dialogues are pretty lame. But surprise, he’s not bad at all. He doesn’t overact, thankfully, and he sticks to what he’s given, or written, with out trying too hard at all. Its because he doesn’t go over the top that he actually works. Check out the scene where his best friend and manager requests him to just drink with him once in life, and the ensuing scene where he does a superb imitation of Mithun Chakravarthy, jig et al! Or the way he agrees to let the investigative reporter Nadia into his house, after he’s totally sizzled. Comic timing is spot on.

For a first effort, it’s commendable.

Is it a pretentious film? Yes. Not just because its about Himesh fulfilling some sort of fantasy or ego trip – he romances a young nubile thing, he sells out entire shows in front of a German audience chanting his name, he has his own jet, foreign bodyguards, fleet of expensive black cars, palatial mansion, he gets to wield a gun, look tough, crack one-liners and hello, Mallika Sherawat drools and throws herself at him! – but because the scriptwriters try to pull

The screenplay is very loose, very convenient. It’s almost as if the screenwriters thought that viewers of this kind of film, Himesh’s fans, wouldn’t be able to grasp something taught and gripping. I think they really misjudged the fans. It’s a shoddy script.

But people can point to ticket sales and say that the exuberant Himesh and the film’s writers and director got big mileage out of a simple approach. The film has been accepted by those same underestimated fans, and is selling out well enough to further Himesh’s stature as a pop culture phenomenon. Caps off….err, or not.