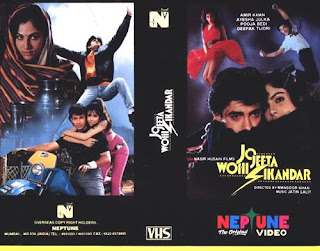 As he lies there on his back, hurting, bleeding, a smile breaks out on Sanjay's face - something he hasn't done for most of the movie's second half - as he hears the din, and sees the appreciation all around. He sees, in is father's teary eyes, pride. The man who's looked at him like a lost cause now spreads his old chest and salutes his son. In his brother's eyes, he sees accomplishment. His brother helped coach him, and believed in him. His brother's pain has been revenged. In his friends's eyes, he's a hero. And in Anjali's eyes...well, in her eyes he finally realizes the love thats been pent up for years. In one thrilling moment, he's gone from boy to man.

Notice the number 13 on the back of his t-shirt when he goes up on the podium to receive the trophy. Classic.

I first saw this movies back in 1992, as a boarding school kid. I've probably seen it 15-16 times since, and each time the film never fails to give me goosebumps. A lot of times you watch a film as a kid, and get totally blown away by it, only to see it years later and think to yourself, "What? I liked that piece of crap?" or "Thats actually a totally bizarre, piss-poor ideology that guy's trying to push" or something like that. ET, anyone?

But even though times have changed, JJWS still remains my favorite Hindi movie. Maybe its because its set in the hills, its about inter-school rivalry, its about cycling, which I used to do a lot of, its about a guy chasing a phony existence, something I think we've all been guilty at some point, its about letting your loved ones down...but most of all, I'd like to believe it was just a damn good film.