- March 18, 2007
The loss to Bangladesh has given India a major headache and highlighted the frailties plauging this side. It didnt' hit me until a few hours back, when I observed a few friends reacting and dissecting the game, how pathetically India had played, and how it would effect the World Cup, and their interest.

As my colleague and friend Anand Vasu pointed out today, here's what India need to do to stay alive in the tournament. Have a look, it makes for painfully interesting reading. 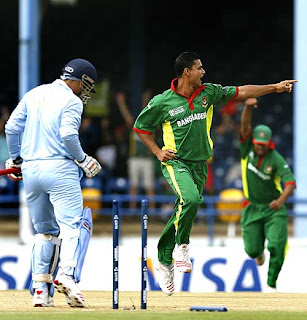 The immediate task at hand is to beat Sri Lanka on Friday. Then, they have to beat Bermuda by a heavy margin - I'm talking thrash/pulverize/decimate them - to improve their run rate. Assuming India achieve even that, the passage to the Super Eights is still not assured; all eyes will then turn to Bangladesh-Bermuda match on March 25. That's the last match of the first round of the World Cup. Who'd have thought so many people would pay attention to it?

Meanwhile, you can hear the knives sharpening above the heads of coach Greg Chappell and captain Rahul Dravid. When Chappell was appointed coach back in mid-2005, much of his task was centred around the World Cup - Vision 2007 - and in that aspect, India haven't progressed one bit. For all of Chappell's experiments, innovation and focus on 'Marquee players', India's World Cup squad alarmingly resembles the one that flew to South Africa in 2003. Of the prospects unleashed during Chappell's tenure, only Munaf Patel, Sreesanth, and Robin Uthappa made the trip to the West Indies. Sourav Ganguly and Zaheer Khan were recalled, Anil Kumble was handed a limited-overs lifeline, and the seniors are all still there. Even Mahendra Singh Dhoni was blooded under John Wright's time as coach.

The others have all fallen by the wayside; the highly over-rated Suresh Raina, Venugopal Rao, and so on.

Under Chappell, India have played 60 one-day internationals, winning 31 and losing 26 for a success rate of 54%. After 60 matches with Wright as coach, India had won 34 and lost 23 for a success rate of 60%. There isn't much in the numbers, but Wright was on the way, with Ganguly as captain and colleague, to rebuild a side trying to move out of the match-fixing scandal and invest in youth. 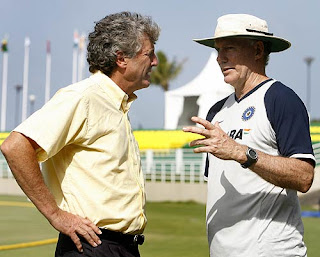 I'm not advocating Wright as a better coach; I'm just trying to figure out what Chappell has done since taking over as coach.

He's successfully killed two of the brightest stars unearthed in India for a long, long time - Virender Sehwag and Irfan Pathan. In a side that's become fit, with a premium on exercise, how Sehwag has been allowed to put on weight is beyond me. And Pathan, who burst onto the scene with genuine ability to make the ball, new or old, talk, was blossomed into a batsman only for his bowling to detiorate to unfathomable levels. Experimentation, they called it.

Going into the 2003 World Cup, India had just been hammered 5-2, and despite a thrashing at the hands of Australia in their first game, they won eight games in a row en route to the finals. In the Test arena, they beat a seemingly invincible Australia at home, drew with Australia in Australia (something no side had or has achieved for years), and beat Pakistan in Pakistan for the first time. And there was the Natwest win at Lord's. True, India lost a countless numbers of ODI tournaments under Wright as well.

Under Chappell, India have just a historic Test win in the West Indies to show (there was a Test series win over a They lost the Test series in Pakistan, and drew with an inexperienced, injury-hit England at home. They lost the ODI series in the Caribbean, and did badly in the Champions Trophy last year.

Now comes this rude World Cup awakening. Too many tactical errors cost India dear. There was something in the wicket, for the new ball, and to have a bat on a new pitch was critical. Then, to have Sehwag open in place of Uthappa - what were you thinking? You can't throw a man batting like him up the order. It would have been much wiser to let him come lower down.

There's a lot of emotional attachment to the game in India, and if India don't make it to the Super Eights, all hell will break lose back home. It's not such a bad thing; this hype needs to come down, the ads need to be taken off the television, and these heroes need to come back down to earth. Dravid has been far from inspirational as captain, and he has to held accountable for much of this dismal effort AND, very importantly, he has to take the flak for picking Sehwag for this last game, AS OPENER, despite failing in the warm-ups; Sachin Tendulkar needs to sit himself down and ask himself just where his career is going; Sehwag has to have a look in the mirror - honestly, I don't see him getting many more chances - and I think after the World Cup, all Chappell has to look forward to is a quieter life in Australia.