Skip to main content
- March 17, 2007
Okay, so I'm clearly not getting around to blogging about the World Cup everyday. One reason is that the interest just isn't there yet. Odd, I know. India hasn't played yet, so that's one fickle reason. But just seeing the size of those ridiculous grounds in the West Indies, and the number of minnows, and Australia, just dampens it all. 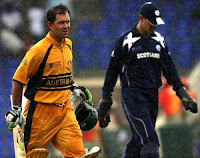 Still, a round-up of the first week's games is a must. The West Indies beat Pakistan comprehensively in the Cup opener; Ricky Ponting scored another hundred as Australia overpowered Scotland; captain Steve Tikolo led by example as Kenya began their World Cup campaign with a comfortable seven-wicket win over Canada; a ruthless Sri Lanka beat Bermuda by 243 runs, the second biggest margin of defeat in World Cup history (and big man Dwayne Leverock so wasn't worth the hype, despite breaking into a little jig after a wicket); then we had a tie, as Ireland marked their first World Cup appearance with a come-from-behind salvage effort against Zimbabwe in Jamaica (three wickets fell for one run and nine were still needed from the final over...requiring a single to win off the last ball, Ed Rainsford was run out!); New Zealand brushed aside a lacklustre England; and then there was that bloody match, South Africa versus the Netherlands. Yuck.

353 for 3, with three 100-run partnerships - the first time such a thing has happened in the 2537 one-day internationals that have been played in the history of the game - 18 bleeding sixes (another record), a Jacques Kallis hundred, a Mark Boucher blitzkreig, and Herschelle Gibbs making history by smashing six sixes off a Daan van Bunge over. Poor little sod didn't know what hit him as Gibbs went ballistic. I know everyone loves a little slog to get the blood rushing, but this was just cruel punishment. Sick and wrong to have these small associate teams in the World Cup.

Best part about the week has been the Fantasy League we've got going on at work. Superb fun. If it wasn't for that, I'd have zero interest. 576 points and counting, though its still some distance away from Shinde, with 1056. Bugger.