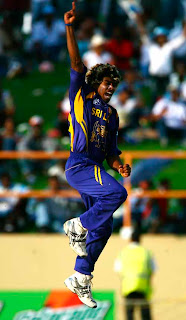 Would a fool bet on them to win?

Probably. Enter Lasith Malinga, who'd bowled seven overs for close to 50. Over 44.5, he slings a slower one that pegs back Shaun Pollock's leg stump. Okay, no sweat, Andrew Hall is in, he's got a Test hundred to his name. 44.6, another slidey, slingey, slowey thing, that Hall lobs straight to cover. Hmm. Heart rates increasing in the South African dressing room?

Over done, the South Africans manage one run from the next over.

Back to Malinga, on a hat-trick. Kallis on strike. Three runs to get from 24 balls now. Easy. The ball is full and furious outside off stump, Kallis goes for a square-drive and nicks it behind. A loud appeal. Kallis stays rooted. An even louder appeal follows and umpire Daryl Harper raises the fatal finger. HAT-TRICK.

You frikkin' bet your ass its a yorker. A screaming one, no less, which Ntini plays all over it and ball crashes into the middle stump. Malinga is slinging down magic deliveries and South Africa are nine down. Four wickets in four balls. History is made.

Charl Langeveldt survived a caught begind appeal, and another full, swinging delivery misses Robin Peterson's off stump by a whister...no, I think it actually brushed it!

As hearts fluttered and Graeme Smith aged from 26 to about 40 in a few minutes, memories of Edgbaston 1999 and Durban 2003 flashed. South Africa really f***** this one up. How can you lose four wickets for two runs?

As it turned out, Peterson edged Malinga to third man for the winning runs, clipped his heels, bashed out the nonstriker's stumps in celebration, and every man in green ran out from the dressing room cheering, and thanking their stars.

I don't think they've done anything to dispell doubts over their chokers tag.