- March 22, 2007
I first heard Rabbi Shergill over a year ago, when I came across his "Bulla Ki Jaana" on B4U one night while surfing the channels at some ungodly hour. The video was interesting, and the music was sufi-ish, but sung by a Sardar, which I'd never seen before. Interesting, I thought. I don't speak Punjabi, but having listened to so many different songs over the years and admittedly, having gone through a Sukhbir phase - there, I've said it - know enough to get the jist of what's being sung. There was a reference to Bulle Shah, who I've always been intrigued by, which I suppose also drew me to the song. And the video was pretty neat, with scribbled words flashing roughly across the screen while this sardar, clad in white, travelled through Bombay.

Anyway, I think I downloaded the song later on, but that was it. Then, when in Mussoorie, by good friend Tashi asked me if I'd heard Rabbi. I said I had, and he asked me if I'd heard a song called "Tere Bin". I hadn't, so he duly flipped out the audio tape and played it, some 349 times (yes, alcohol was being consumed). I liked this one, too. Again, I understood pretty much what Rabbi was singing about.

I heard the song again a few weeks later, on the radio, and downloaded it. Its really a beautiful song, better than "Bulla". And it can be translated into an ode to a lover, best friend, father or mother. There's just something about this song that's very endearing. 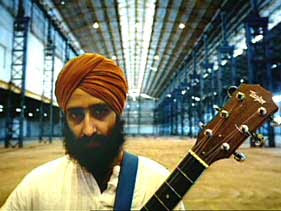 Here, shamelessly taken from someone's hard work on Wikipedia, are the words to "Tere Bin".

tere bin / besides you
sanu sohnia / my love
koi hor nahio labhna / i shan't find another
jo dave / who'll give
ruh nu sakun / peace to my soul
chukke jo nakhra mera / and indulge me
ve main sare ghumm ke vekhia / i have gone and seen it all
amrika , roos, malaysia / america, russia, malaysiana
kittey vi koi fark si / there wasn't any difference
har kise di koi shart si / they all had some condition
koi mangda mera si sama / some asked for my time
koi hunda surat te fida / some were fascinated with my face
koi mangda meri si vafa / some demanded my fidelity
na koi mangda merian bala / none wanted my demons
tere bin / besides you
hor na kise / no one else
mangni merian bala / wanted my demons
tere bin / besides you
hor na kise / no one else
karni dhup vich chhan / shall shade me in the sun
jiven rukia / (the) way you paused
si tun zara / slightly
nahion bhulna / i shan't forget
main sari umar / all my life
jiven akhia si akhan chura / you said, looking away
"rovenga sanu yad kar" / "you shall weep in my memory"
hasia si main hasa ajeeb / i laughed a strange laugh
(par) tu nahi si hasia / but you didn't
dil vich tera jo raaz si / you had a secret in your heart
mainu tu kyon ni dasia / why didn't you tell me
tere bin / besides you
sanu eh raz / none shall tell this
kise hor nahion dasna / secret to me
tere bin / besides you
peerh da ilaaj / what druid
kis vaid kolon labhna / has the cure to my ills
milia si ajj mainu / i found today
tera ik patra / a note of yours
likhia si jis 'te / on which you had scribbeled
tun shayr varey shah da / a varis shah couplet
park ke si osnu / upon reading which
hanjnu ik duliya / a teardrop fell
akhan 'ch band si / what was locked in the eye
seh raaz ajj khulia / was revealed today
ki tere bin / that other than you
eh mere hanjnu / these tears of mine
kise hor / won't be kissed by
nahio chumna / none else
ki tere bin / that other than you
eh mere hanjhu / these tears of mine
mitti vich rulnha / will wither in the dust

I think what I liked about Rabbi - as happened with Silk Route and to an extent Lucky Ali - was that he just sang about whatever he had a passion for and that his videos had no scantily clad women in them. It was just him, his guitar and some soulful music. More than the two artistes I've mentioned, his music is more political. "Jugni", another good track, talks about a lonely girl's travails as she wanders from place to place in India, looking at the poverty, destitution, political turmoil, all the while praying for sanity to take hold.

Rabbi is also deglamorized, which is very refreshing to see. Interestingly, he has read the scriptures and understands the concept of Sufiana.

He publicly said, a long time back, that he wouldn't "sell himself" to Bollywood soundtracks for one item song - he even turned down songs in Paap and the "Allah Ke Bande" number - but has just composed the entire music for an upcoming movie, Delhii Heights, which is a so-so effort. Barring the title track, "Dilli", which leans heavily towards a U2 base, and Sonu Nigam's "Kitni Der Tak", the songs are experimental and different, but I didn't take to them. He's thrown in "Tere Bin", which should boost album sales some.

But anyway, I love "Bulla Ki Jaana" and "Tere Bin", and I encourage you to listen to these two songs.