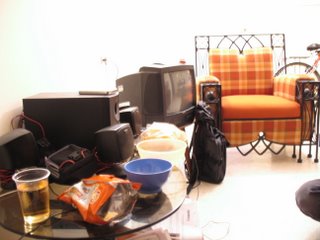 I don't come to this page nearly enough as I should. No excuses on offer.

Moved to Bangalore in the beginning of November, after a year or so in Bombay. Like the place. Very small compared to Bombay, but fab weather in the winters, and some good pubs. I like the feel of the place, though I'm afraid its already mellowed me and I may be in danger of retiring within the year. Most places shut by 10:30, believe it or not. Most of the time its head to someone's house and chill there.

Have a nice place though, shared with two friends from work. Good dig. The commute to work is about 15 mins max by rick, which is so much better than what I was doing back in Bombay. Yeah, much better. Centrally located office, next to the mall, restaurants, pubs, and so on. Haven't really explored all of Bangalore, but what I've seen I've liked.

Work's going well. Been busy. Will get busier with the World Cup coming up in March. Planning on taking a few days off at the end of February and hitting up good old Mussoorie with some old high school buddies and some from work. Hope it works out.

Off to Port Blair, in the Andamans, for five days later this month. Doing some small role in one of dad's new movies. Playing his character in a flashback, apparently. Its a movie on the tsunami, with fictional characters. Looking forward to it. Not really faxed by it. Whatever, let's see how it goes. Nice beaches there, I hear.