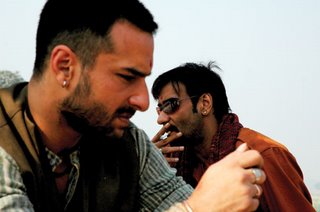 I've seen Omkara five times now, and each time the film leaves me captivated. This is arguably the best film of this year. From the opening scene - which captures the rugged Indian landscape in a way not seen since Sholay, or to a lesser level Bandit Queen - between Saif Ali Khan and Deepak Dobriyal to the final in which only Viveik Oberoi remains standing, the film is first-rate. Critics of the film have singled out the rough, Uttar Pradesh-dialogue (which, honestly, is a kitsch of UP and Rajasthani) to the slow pace and the seriousness of the climax, but that's all just a load of bull. In these times of Kabhi Alvida Naa Kehna and a long list of Juhu-born, London-fed yuppie directors churning out candyfloss to no end, Omkara is poignant, no-nonsense cinema.

Kudos to Vishal Bhardwaj, the director-cum-music director. In cricketing parlance, his masterpiece Maqbool was a one-dayer, and Omkara a fullblown Test match. Here, Vishal proves without a shred of doubt that he is a fine storyteller and great director. He is right up there with Mani Ratnam, Ram Gopal Verma, and Rakesh Omprakash Mehra (yes, he's only two films old, but did you see Rang De Basanti?). First, he handles an amazing starcast with ease and gets the best out of each. Ajay Devgan excels in the title role, one that he was born to play, Karishma Kapoor delivers a break-out performance, Konkana Sen Sharma rises above her role, Oberoi and Bipasha Basu are, thankfully, taught to hold themselves back, Dobriyal is given a sensational debut, and Saif...well, Saif is given the role of a lifetime. But more of that later.

Vishal adapts Shakespeare's classic Othello for the Indian audience. His screenplay, with Robin Bhatt, takes the Bard's work and plants it firm in the rustic setting of North India, allegedly in and around Meerut, where Vishal is from. The dialogue is arguably the most realistic we have seen in recent times, with detail paid to the mannerisms and actions of each and every character in the film, from main to miniscule. The strong dialogue may have been a deterrent to family audiences, but subtract those and the film would have been much less the sensation it is. In fact, it is one of the few mainstream Indian movies to contain uncensored abuse, though there are parties across the country lobbying to have the film taken down from theatres if these lines are not edited.

In short, here's the plot, as summed up by movietalkies.com:

"Set against the milieu of political warfare in the interiors of Uttar Pradesh, the film follows one man's descent into sexual jealousy because of his passionate love for his woman and the final destruction of that love at the altar of blind obsession. Love is blind but jealousy is even blinder and that can tear apart even the strongest and bravest of warriors - in this case Omkara. Omkara or Omi is a gifted chieftain who heads a gang of outlaws, which include the crafty Langda Tyagi and the dynamic Kesu amongst his chief cohorts. The story begins when Omi appoints Kesu and not Langda as his chief lieutenant. Langda's pride is slighted and raging with envy he hatches a plot to falsely implicate Omi's beautiful wife Dolly, in a love affair with Omi's "favorite lieutenant", Kesu. With the unwitting aid of Indu, Langda's wife, and the willing help of Rajju, a fellow grouch, Langda's plan blooms uncontrollably and results in horrific tragedy. Using petty insinuations and lies, Langda keeps poisoning Omi's mind till one day it snaps and Omi goes about tearing up his own safe and secure world... But like all love stories which never really end. Out of the ashes of this one too comes a twist... Omkara's dark love for Dolly, Dolly's unquestioning love for Omi, Langda's warped loyalty and jealousy for Omi, the vibrant Kesu's unswerving devotion to Omi - all lead up to a dark tragedy by the end of which Omi finally realizes the backlash of his actions but is it too late?"

If you haven't seen it, please go do so. In the theatre, too. The lasting impression from the first viewing is Saif's portrayal of the wicked Langda Tyagi. He takes the original's Iago - played with cunning conviction by Kenneth Branagh at one time - and walks away with the film. He is superb, and has come an entire life span since his forgettable debut in the early '90s. His dialouge delivery, his look, his mannerisms, all are unforgettable, and draw you back to the film. His numerous confrontations with Devgan are immense, and every time he enters the frame you wait to see what he does next. Hats off.

And then there's the music. Every song is virtually a story. Naina unwinds the story of how Kareena's Dolly fell in love with Omkara, the passion with which she loves him, but also beautifully lets us all know the frailty of this love. The title track epitomizes Omkara's brooding yet overpowering character, while O Saathi Re is haunting for the way in which it canvases the love that will never be between Omkara and Dolly. Beedi, with its brazen lyrics and uninhibited rustic charm, acts as the catalyst for Langda's devious plans and the ultimate undoing of Omkara and Dolly. And Suresh Wadkar makes a welcome return with Jag Jaa, a soft lullaby that makes its presence felt at two key junctures in the film, in quite contrasting scenes.

I'm going to stop now, and encourage you to go watch this film.

Preya said…
Othello is one of my favorite plays, and I really want to see this, but I'm waiting to see it with someone who can help me understand all of it.
2:22 AM