Showing posts from July, 2006
Show all

- July 08, 2006
Its arguing with Saad over who’s better, Sachin or Lara It’s drinking tea with Ehtesham As over the radio you hear Zaheer bowl Steve Waugh It’s discussing Sachin’s batting With Kabir, India vs England, 3rd Test, Bangalore It’s calling up Nikhil at 3 am To tell him Saurav won the toss It’s waking up to check the score, And then wishing you’d never gotten Out of bed It’s hearing Chattha talk about The time he bumped into Shoaib It’s Imran telling you he stood Up in the stands at Gaddafi To clap for Sachin It’s finding out that you Were once at the same Match in Bombay as Karan and Nilesh It’s telling Cato that India Will beat Zimbabwe on February 19, 2003 It’s Cato telling you that they can’t It’s Jamal swearing by Wasim Akram as the Greatest fast bowler It’s sitting with Deval And Avais as India Struggle against Holland It’s getting an extension wire Down to the basement of Calcei It’s walking to Lowry At a quarter to seven in The morning to get coffee After Sehwag has bl
1 comment
Read more 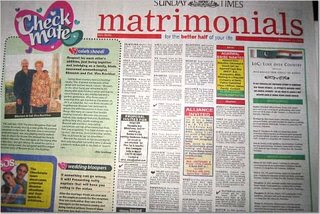 Much more than jazz by the bay...

- July 08, 2006
Enjoyed a good evening of classic rock yesterday. My friend Anil and I headed down to Not Just Jazz By The Bay to check out this cover band 'One Night Stand', who are all old MTV buddies of Anil's. They rocked. It was a dry day - another stupid reason or something from the Maharashtra govt - but we were hooked up with rum n cokes now and then thanks to the band. We didnt really need the drinks, because these guys were awesome. They belted out classic rock numbers from Cream, Deep Purple, The Who, Van Halen, Iron Maiden, AC/DC, Guns n Roses, and more. As Nina Manuel and her After Hours entourage prowled the backstands and a quite 'happy' Cyrus Broacha made a vocal guest appearance to cheer his rock buddies on, the band kept all of us jamming with classic song after song. Just before the close, Sarosh, the lead guitarist, played the sweetest version of 'Where the Streets Have No Name' that I've heard since U2 live at the Boston Garden. It was intense. T
Post a Comment
Read more

- July 02, 2006
The monsoon season has begun in Bombay. It has been seven summers since I last experienced it, and I don't know if I really missed it at all. While it's refreshing to have a shower take the humidity away, the tension of wading through the muck and travelling on the local train in a downpour is far from comforting. It's not all Monsoon Wedding , as Mira Nair would have you believe. The monsoon hits Bombay in the month of June; tumultuous showers, sporadic though they may be,last till the end of August and make the climate pleasantly bearable. Last summer, on July 26, the city witnessed the worst case of rain and floods. Floodwaters poured into houses in Bombay’s northern suburbs, streets and houses were wrecked, buildings collapsed, and doubledecker buses were submerged. Tens of thousands of people were stranded for hours on roads in Bombay, and its airport, one of the busiest in the country, was shut on Terrible Tuesday. After six days or monsoon carnage the death total hi
Post a Comment
Read more

The case of Laxman

- July 01, 2006
Take that 281 at Eden Gardens and lock it up. Wrap it preciously in satin, place it securely in a treasure chest, and don’t look back at it. At least not until the end of VVS Laxman’s international career. Laxman, the man, the cricketer, the victimised, needs to be freed from the expectations that succeed that breathtaking innings. An innings that made us proud to be Indians, for India brought Australia to their knees in stunning fashion. This was the Australia of 16 successive victories humbled by the most gentle craftsmen, soft of hand but brutal in mastery. After Laxman's golden run against Australia, Steve Waugh said: “If you get [Rahul] Dravid, great. If you get Sachin [Tendulkar], brilliant. If you get [VVS] Laxman, it's a miracle.” No miracle this, for Laxman now finds himself caught between the past and the future. Adam Gilchrist wondered aloud: "Everytime he plays against us he comes up with something special and the next thing we read after the series is he is
Post a Comment
Read more
More posts