- June 18, 2006
Had the pleasure of watching a selection of the late Renu Saluja's finest works - she was one the best film editors Indian Cinema has seen - during a nine-film festival at Fun Republic this weekend. Didn't catch all nine, but the ones that I did were special.

The one that stood out - I hadn't seen it previously - was Saeed Mirza's under-rated social satire Mohan Joshi Haazir Ho!, translated as 'A Summons for Mohan Joshi'. A parody on housing legislation, this film was based on a simple yet taught screenplay, deft direction, an ensemble cast that turned in wonderful performances, and cinematography that captured the city of Bombay brilliantly. 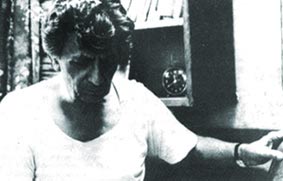 The plot, in brief: Joshi, a retired clerk who lives with his wife and family in old Bombay tenement - a chaal, to use Mumbai-speak - sues his landlord, which starts a complicated and expensive legal procedure. Eventually Joshi realises that one cannot win against entrenched economic powers.

Released in 1984, the film still rings true in 21st century Bombay. The same troubles, foibles, corruption, filth, and nature of man. I thought the casting was impeccable: Bhisham Sahni, as the title character, evokes sympathy in the viewer in a restrained performance based on mere expressions and body language; his wife, the late Dina Pathak (a fabulous actor), is his rock; Naseeruddin Shah, as the conniving, slick, shamefully dishonest laywer Malkani, is all scum yet you wait for him to return in the next scene; Satish Shah, as his partner in crime, fits hand-in-glove; and the late Amjad Khan, a revelation as the corrupt property developer Kundan Kapadia. Khan seems like a miscast in a small-budget film like this, but he is hilarious. (Note the shaving scene).

Even the back-up cast, from the two "investors" (read thugs) in suits n shades; Joshi's son and daughter in law; the two young lovers caught in their parents' animosity; the bumbling prosecutors; the supportive butcher, Kareem, who stands by Joshi in his attempts; and all the chaal-dwellers. I suggest you go out and buy the dvd, if available, or vcd. It's worth it.

Of the others I saw, Parinda and Dharavi were also supreme works. In fact, these three movies, made in the early and late 80s, and early 90s, were better than the last five Bollywood movies I've seen. Dharavi, set in Asia's largest slum by the same name, is a stark, gut-wrenching tale of a taxi-driver (the awesome Om Puri) who aspires to own his own textile factory but whose dreams take a severe beating in the face of corruption, poverty and communal violence. And little needs to be said about Parinda, Vidhu Vinod Chopra's best film and a masterpiece from its era. Arguably the the first realistic gangster film in Indian cinema - this was years before Satya, Vaastav, Company, Sarkar, D, and the rest - this film succeeded with its gripping screenplay, excellent direction, and powerhouse performances. That Chopra was unable to make another film of this magnitude is a bittersweet tragedy.

But this got me thinking: what happened to directors of the 80s who started out brilliantly but faded away? Look at the case of Kundan Shah. His situational comedy Jaane Bhi Do Yaaron, released in 1983, is regarded as the best comedy ever made in Indian cinema. Made on a budget of just seven lakhs, this movie gathered cult status and is revered to this day for the effortless manner in which politics, corruption and slapstick humor were melted together.

After such a promising start, however, Shah fell from grace, big time. After falling into the trap of mainstream Bollywood cinema, Shah never came close to the magic of his masterpiece. Ten years on from Jaane Bhi..., Shah made the quirky Kabhi Haan Kabhi Naa (one of Shah Rukh Khan's best performances) a simplistic, subtle and circumstantial comedy, but that was it. Does anyone even remember Hum Toh Mohabbat Karega?, Dil Hai Tumhara and Ek Se Badhkar Ek? Does this support the theory that a filmaker cannot survive on individuality and that he will succumb to Bollywood's big-star-bigger-budget ploy? Though he got surprise success with 2001's Kya Kehna, the film was far from decent cinema, and when compared with his first work, hardly appealing.

Even Govind Nihalani, who shook the system with Aakrosh, Ardh Satya, Drohkaal, went awry with Takshak and Dev. Ushering in big names such as Ajay Devgan, Amitabh Bachchan, Fardeen Khan and Kareena Kapoor, Nihalani was unable to convey his gripping realism and imagery in the way he did with his old hand.

Whatever the reasons, such realistic cinema as witnessed at the festival has taken a beating and is hard to find. Bollywood simply does not want to break the mould and support such cinema. Vinay Shukla, who made the Shabana Azmi powerhouse Godmother in 1997, has not made a film since. Only Sudhir Mishra's Hazaaron Khwahishen Aisi comes to mind. And Mishra is someone who has managed to stay clear of Bollywood's sterotypical trap. I wish Bollywood would get its thick head out of the run-of-the-mill escapist hole its in and support attempts such as these.
Carpe diem.