- June 18, 2006
With Rang De Basanti and Fanaa being unequaled blockbusters, Aamir Khan never had it any better.

Shah Rukh Khan may still draw the crowds with Karan Johar's help, but Aamir is the most dependable star around. Dependable is a word that is often fickle in Bollywood, and many will gladly throw up Salman Khan's name before Aamir's. Where SRK will always only do well in YashRaj films and will remain out of synch in any other role, Aamir has, since the brilliant Rangeela way back in 1995, made a conscious effort to do cinema that excites and challenges him.

It's his constant need to reinvent himself that has seen Aamir stand apart from his contemporaries. The chocolate lover boy of the 1990s has made way for a serious, thinking, perfectionist who has attempted to keep himself ahead of the rest. He has faltered, on occasion (Mann, anyone?) and not all of his experiments have worked. Mangal Pandey - The Rising opened big, but failed to captiviate the audience for long. It took a while to make, and was Aamir's first release in four years. Yes, four years. Overtly choosy, Aamir put his blood and sweat into the film but the final result was cliched and lacking in plenty. 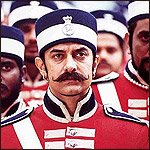 Recreating history is no easy task but Aamir and director Ketan Mehta did not do justice to the story of India's first revolutionary. While Aamir was, as always, sincere in his efforts as the legendary title role, the film did not come across as entirely believable. A bumpy narrative did little to bolster the weak character sketches. Gyrating belly dancers, a low-grade Umrao Jaan private-mujraa rip-off and the mis-cast Rani Mujherjee and Amisha Patel didn't help.

He more than made up for that indiscretion with Rang De Basanti, a film that pricked the conscience and challenged the viewer to think outside of the box. Best of all, he didn't entirely hog the film, and the ending, critically, was not all about him. He had a deft director, Rakeysh Omprakash Mehra, who was thankfully allowed to be the boss and weave his craft as he had invisioned it.

Far from your run-of-the-mill Indian movie, RDB successfully weaved historical facts with contemporary themes. While I do not agree entirely with the film, I think it was a landmark film in Indian cinema's history. It was a sincere attempt at making a pivotal, social point, and it does what few Indian films in recent times have done - make you pick a side.

Fanaa however, is an interesting case. The film made Indian cinema history when it recorded the best opening ever. But the film is far from a classic. The screenplay is riddled with loopholes - Aamir passing off as an international terrorist mastermind, the manner in which he effortlessly joines the Indian army, the second half and its mockery of the Indian Intelligence - the soundtrack, barring 'Chand Sifaarish' is mediocre, and the supporting cast lacklustre. The saving grace is the fantastic Aamir-Kajol chemistry. 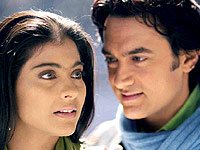 Frankly, I think Aamir was out of place in Fanaa. Something about him being in a Yashraj production feld odd from the start, and seeing him try to carry off a role perhaps more suited to SRK was odd. As the incorrigible flirt-cum-tour guide Rehan, Aamir carries the first half admirably. But in the second half he just doesn't convince, and a weak screenplay doesn't aid him any. The success of the film cannot be denied, and Aamir has again proved that whatever the role, banner or director, he is a big, big draw.

In my mind, the summer of 2001 was Aamir's finest. The season opened with Lagaan, a sweeping epic that rode high on brilliant cinematography, fine performances, taught direction, a fine soundtrack, and most importantly, a plot that was different. Simple though it was - the poor rebel against the suppresors and come up trumps - it was Aamir's role, his best to date, and his hand in the production that set Lagaan apart. Bhuvan was believable, even when he hit that last-ball six. 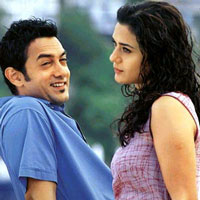 What they had in common were high production values, superb direction, great music, and Aamir. The best actor of the lot in DCH, Aamir portrayed the character of Akash brilliantly. You're only as good as your script, they say, but Aamir was ahead of all. The manner in which he evolves from a give-a-damn slacker to a friend insulted to a man who finds love in the oddest of places was awesome. The finest scenes in the film were when he realizes he loves Preity Zinta's Shalini in the Sydney opera house and the following when he drops her home just after, and is caught between the old Akash and the new.

There are plenty of performances that come to mind when you think about Aamir. Dil Hai Ke Manta Nahin's Raghu Jhetly, Munna from Rangeela, RDB's DJ, the hilarious Amar from Andaz Apna Apna, DCH's Akash, ACP Rathod in Sarfarosh, the jilted Dilnawaaz in 1947:Earth, Bhuvan from Lagaan, and Akele Hum Akele Tum's estranged husband, Rohit. Can you imitate one of these performances, like every child or comic can SRK's Rahul or Raj from any number of films?

Today, Aamir seems to be at the top of his game. He combines being a star and a fine actor in ways that his two nearest challenger, SRK and Salman, do not. And he's bankable in the overseas market, a must in these global times. Like 2001, 2006 was Aamir's year. Let's hope we don't have to wait another five years to toast his talent.