It was the day before Diwali, but the firecrackers exploding at the Sawai Mansingh Stadium were unmatched by any that would succeed November 1.
Bazaars were jam-packed with last minute shoppers; cookware stores spilled their goods onto the streets; coolies strained under loads of TVs, DVD players and washing machines, and sweet sellers were doing a roaring trade.

Amidst this ruckus, Mahendra Singh Dhoni was stamping himself into the history books with an effort unparalleled by any Indian effort for a long, long time. His 10 sixes in the match – the most by an Indian – carried him to a record 183 not-out against a hapless . Dhoni was adjudged Man-of-the-Series in ’s 6-1 rout of the tourists, but the resounding effect of his performance had echoed louder than many could have envisioned. 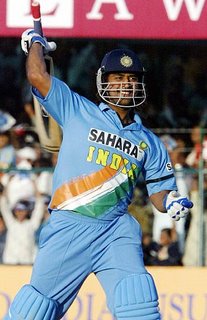 From being run out for a first-ball duck on his debut against to recently being crowned the No.1 one-day batsman in the world, Dhoni has surpassed any other Indian batsman in their introduction to one-day cricket. He has had a phenomenal start to his one-day career since making his debut in December 2004, and based on the sheer effect he has on the game - get the adrenaline running in the cricket viewer and have the potential to bring so much to the game, not to mention carry it away in a matter of an over or two – Dhoni is a superstar.

To whom do we credit this meteoric rise? Surely sheer talent cannot be the reason he has scaled such heights? The Rahul Dravid-Greg Chappell pair has undoubtedly worked well in terms of promoting young talent – a foundation laid down by their predecessors, Messrs. Ganguly and Wright? The burgeoning role that television played in bringing the game to remote corners of ?

The fact is that Dhoni is the product of a system that encourages youth and which has given cricketers from the smallest corners of a chance. Once neglected in favour of players from big cities, today’s has youth from villages, towns and districts that would have been overlooked a decade ago. And, crucially, Dhoni epitomises a new breed of youth whose hunger is unbridled, and whose confidence stems from competition.

His need for speed and love for fresh milk every morning are well documented, but tell a story of a small-town boy thirsting for the elements. There is a blasé, raw manner to his batting, be it the way he dispatches the ball over square leg with a flick of the wrists from offstump, or when he drives it through mid-on. Coaching manuals may as well have been written in the third century BC for Dhoni – he defies rule of thumb in his approach to hitting the ball.

The game of cricket has always needed big hitters. ’s Polly Umrigar has been quoted by many as being the hardest hitter of the ball that they have seen. Sandeep Patil, he of the six fours off one Bob Willis over, brought a sense of urgency to an Indian lineup filled with classical strokemakers. Sanath Jayasuriya changed the way we now view the first fifteen overs of a one-day game with his audacious stroke play and horizontal flat-bat shots over the infield. Before him, Krishnamachari Srikanth was known for his bizarre tactics against the quick bowlers. Viv Richards’s power was awesome, and his shots off both front foot and back still reverberate in the stands of and .

It is from such men that Dhoni borrows his effectiveness, but the little time he has needed to scale the top is jaw-dropping. 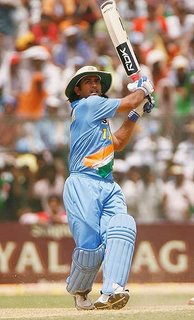 There are three basic aspects to Dhoni’s game – speed, confidence and unflappability. For someone with an unorthodox technique, the bat speed he generates is remarkable, his running between wickets is one of the quickest have seen, and his timing is pretty damn sweet. And then there is the it factor. His seemingly nonchalant disregard for the opposition – notice the way he stepped into the cauldron of India-Pakistan combat and nervelessly plundered runs – and an unfazed exterior/interior is what stands him apart from others in his side.

Asian batsmen are known to be wristy craftsmen and Dhoni is the Andy Warhol of this artistry – bold, aggressive, and constantly redefining. Look at the way he drives, crudely reaching out to the ball by extending his wrists, or the manner in which he rocks back and works a ball on offstump to fine leg.

Dhoni can admit that Adam Gilchrist was his idol, but he has taken himself higher – with the bat - in a much more limited timeframe. Both took five matches to make an impact, but is must be noted that Dhoni has achieved, in 42 matches, what Gilchrist and Virender Sehwag, whom some have suggested inspired Dhoni, did not. In the same 42-game timeframe, Dhoni has scored more runs (1372) at a higher average than Gilchrist (1300, 36.11) and Sehwag (1227, 34.08) and has contributed to more wins than the two had when they began. And that he broke the highest score by a wicketkeeper in ODIs – Gilchrist, of all people – in that Jaipur blitzkrieg proves that Dhoni is a man who does not want to bat in anyone’s shadows.

Any analysis of Dhoni must include his contributions to ’s 4-1 ODI win in earlier this year. On difficult tracks and against a fiery Pakistani pace attack, Dhoni consistently chipped in with scores that sealed the deal – and the way he stepped into the cauldron of such a storied rivalry and nervelessly plundered runs was awesome. Dhoni has been a major factor in ’s recent ODI success. He averages an overwhelming 101 in Indian victories and just 22.62 when they lose. In short, Dhoni scores, win.

The henna-stained locks that drew the praise of ’s president, may not remain a constant, but the thrill and the adrenalin look here to stay.