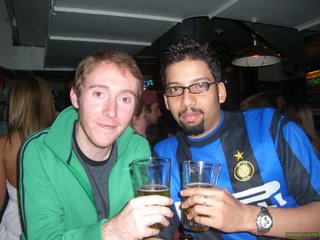 Beer. The most popular form of alcohol and the common drink at so many occasions. The one drink that'll always be in a guy's fridge or mini bar. The drink over which friends are made, games are watched and stories are told. How many countless tables at bars across the world have seen relationships forged and bets lost as a penalty kick is averted or a three-pointer nailed at the buzzer in overtime?

Beer has been around for years. About 6,000 years. A Texas University professor put together this timeline which highlights the interesting role role that beer has played in human history. Can you imagine Sumerian nomads kicking it down by the Tigris or Euphrates with a pouch of beer in their hands? Shepherds in Southern Mesopotamia talking sheep and flocks over a nice cold one? Classic thoughts there.

Just flipping through the television channels will showcase America's obsession with beer. Beer and television, they're just so perfectly tuned in. Bud, Heineken, Sam Adams, Miller, Coors, all these brands have some of pretty hot and funny commercials on air. Tell me you haven't seen the 'Wing man' ad and been like, ahh, yes, done that with a lager in my hand. How about those two Guiness idiots, with their "Brilliant!" line? You've imitated that a few times, haven't you? The Miller spot with Burt Reynolds and Co. sitting before beer bottles and solemnly debating "Man Laws"? And how about those Coors twins? Yes, most of these ads are infested with brainless dudes and buxom blondes, but then its beer we're talking about, not a life insurance policy. Sit back, open a bottle, and laugh.

Over the last few days, Sam Adams, Sam Adams summer ale, Brubaker, Molson, Coors, Heineken and Amstel have flowed. I've never really been a beer person - its a tough call between Jameson and Old Monk rum - but this trip here has been one of indulgence. 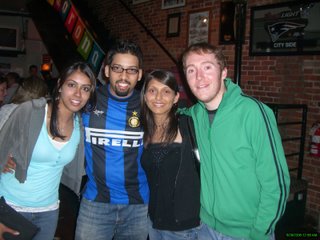 So anyways, yesterday a good time was had hanging at CitySide, my favorite spot in these parts. Shabad, who recently graduated from Wooster, downed a couple before heading to New York, and then Sid, Riddhi and Bindi stopped by. It was their first time at CitySide, and probably not their last.

Much beer was had, obviously.

And for the interested, Newcastle Brown Ale is looking for someone to blog for them.