- May 26, 2006
It's been a week since my last post on my time in Boston. Damn, I'm not too good at this stuff. Been a decent week, though. Working, hanging out with friends new and old, eating some good food, walking the streets (what a relief to just be able to WALK), and of course, watching the baseball and NBA playoffs at bars.

When I caught up with a few of the old friends from Sunlife - Mel, Megan, Derek - I filled them in on cricket and what I do, much to their surprise and amazement.Cricket is just too bizarre to be accepted in North America. Seriously, its as simple as that. For the American sports fan, the concept of a sporting encounter without a result is akin to a first date without a kiss. 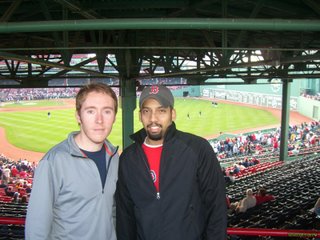 Anyway, I decided to catch a baseball game live just to get another sense of the magic of a 'real' encounter and see what comparisons/contrasts I could draw. What luck, too: caught a Red Sox-Yankees game on Wednesday: awesome experience, even though the Yanks beat us 8-6. Being in a baseball stadium, and one as hallowed as Fenway Park, was just too cool for words. That it was a game of the magnitude of this, with the series poised 1-1, made it all the more special. Was with an old friend, Sid, and a new one, Monojit (it was his first baseball game) and it was cool to take in the atmosphere of the park and Boston's amazing fans.

Totally different vibe than a cricket match back home. Cricket fans are intense, don't get me wrong, but the sight and feel of a capacity 35,000 stadium, under lights, the players and players illuminated under a dark sky and against a sea of spectators cheering, was just something else. The fans really get behind their side, and these Boston fans are a brutal lot.

I've heard much of the criticism of both games from either side of the debate: cricket is slow, you play for five days and there's no result, you break for tea and snacks, you wear white, pitching in baseball is only about speed, the fielders wear gloves, a baseball is softer than a cricket ball, the skill level involved in cricket is higher, any moron who can hit the ball hard can do well in it, etc. But frankly, they're two different games, played by different types of athletes, and in front of a different type of audience. Just keep it at that; a comparison is futile.

It is known that the relation between cricket and baseball goes back to the 17th century, when the migrant English brought along a game called 'rounders’, the earliest form of cricket. Right here in Boston (as well as neighboring New York), cricket grew into a favorable contest and was played in various capacities. In baseball's foundation years, cricket looked very much like its cousin. Then as time ticked on, the aptitude for a long game lessened and a shorter version was favored, and the rest as they, is history.

One interesting piece of trivia, though. An uncle of mine, a passionate baseball fan who used to also bowl nasty outswingers and bouncers to my father when they were growing up in India, once told me that in the first dated picture of the the first baseball diamond in Cooperstown, New York, if you look closely you can see a long strip that very well looks like a cricket pitch smack in the middle of the ground.

I honestly believe cricket and baseball are the two greatest sports to watch. There, I've said it. Hah. Cricket, especially Test cricket, is an exhilirating 'test' of an athlete's physical and mental prowess, and the skills that demand batting for sessions and bowling 30 overs in a day, and to field for a day and a half straight, are simply unique. You travel the world, play in different, testing conditions, with fans of differing cultures, and its just all to amazing. And Baseball, for me, is the richest example of America's glorious sporting culture. 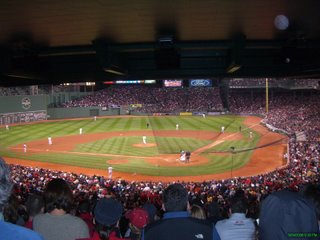 Both sports play an important part in the culture of the societies in which they are popular. In India, its a religion. The subcontinent, and to a large extent Australia, is a glowing example of how popular the game is.

Ed Smith, the former Kent and current Middlesex batsman (who played three home Test matches against South Africa in 2003), wrote a book called Playing Hard Ball which describes his experience in and around the Major and Minor leagues in the States, in an attempt to explore baseball and compare it to cricket. Haven't read it, but have been trying to get my hands on a copy. Should make an interesting read.

So, in between watching the Red Sox drop two games to the Yankees, I had to sit and watch India lose two in a row to a resurgent West Indies. The hosts have played an amazing round of cricket in the series, and have pushed India, pre-series favorites, to the limit. Hats off to Brian Lara, Ramnaresh Sarwan, and Ian Bradshaw and the rest for drilling India and making this a fantastic, nail-biting contest. India's overseas record has once again reared its ugly head, and this does not bode well for the Test series.

In related news, I read Sambit Bal's piece about the ICC's fruitless expansion dream in North America on the site, and agree with most of what he's said. The ICC has its political and financial considerations, yes, but to try and promote cricket even in these expatriot-invested shores is all too optimistic. Won't get into a discussion on this right now.