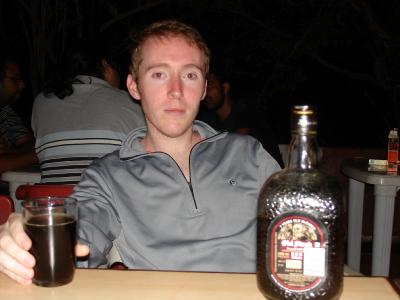 Greetings one and all -- whether you've been directed to this blog or just happened to stumble upon it!

This is not an attempt at creativity or merely a way to advertise myself or my ideas. This is simply a place to unwind over a cup of coffee and a cigarette and to discuss/share/debate anything on your mind.

So please, drop a word, line or whole essay if you feel the need. Friends from Woodstock and Wooster, I would love to chat about stuff in the ways we used to.

A bit about myself, for you wayfairers passing by:

Born and raised in India - in Bombay, the most happening city in the country, and Mussoorie, a lush hill station nestled in the foothills of the Himalayas - I studied at Woodstock International School (in Mussoorie), the American School of Bombay (ASB) and Franklin Marshall Elementary in Harrisburg, PA, in the United States. After graduating from Woodstock in '99, I took a semester off and worked at ASB before heading off to the College of Wooster in Ohio. I graduated from Wooster in '03 and lived for two years in and around Boston, MA before heading back to start work with Cricinfo.com.

And yes, a few words about my love of cricket!

Well, I didnt take to the game seriously until I returned to boarding school in North India for grades 9-12, at which time I happened to run smack into the 1996 World Cup. Then all hell broke loose; I wanted to know who Brian Lara was, why a googly was not a bridge in West Bengal, and what all the hype was about Sanath Jayasuriya.I realized that I was never going to play for any Test country about a day after trying my hand at the game, and so I thought well atleast I can talk and write about it.Having spent the last six years in the States trying to explain the game to family and friends alike,I have come to the conclusion that for the American sports fan the concept of a sporting encounter without a result is akin to a first date without a kiss.

I have been asked a number of questions about cricket, the two most common examples being:
Q: "Dude, you're the croquet player who speaks Indian, right?"
A: Yes, I play cricket, and yes, I also speak a second language - Hindi.
Q: "What d'ya call those pegs out there in the middle?"
A: Those are called stumps, or wickets, and they're placed at each end of the pitch.

I have, however, been fortunate to play cricket in the hills and valleys of the great Himalayas, and in a small wicket tucked away in a lush green forest in Surrey, and in various grounds across the US. I was privilidged to captain my House (high school), community, and college teams, and I've daydreamed my way through countless History and Political Science classes. While professors tried to explain how Russia's being isolated from Western Europe was a disadvange to the great Soviet State and how Freidman' s theories on globalization were lateral, my mind was in Durban and the MCG.

Brian Carpenter said…
I've had an enjoyable surf around, Jamie. I don't know why it's taken me so long to find you, but you can thank Dilip Premachandran, who mentioned you in a tweet this morning.