Skip to main content
- August 08, 2011
There are some cricketers who manage to endear themselves to individuals for various reasons. I'm not talking of superstars or legends of the game, but of those smaller figures who, for one innings or shot or spell or catch or celebration or series, left an impression. For me, one such cricketer is Robert Croft. 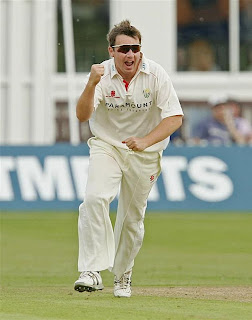 Croft played only 50 one-dayers and 21 Tests for England, and will probably be remembered as an international cricketer more for his gritty unbeaten 37 scored in over three hours - and which made up for three wicketless Tests- to help seal a famous draw against South Africa in 1998 and for his decision not to tour India in 2001 because of security concerns more than for his prowess as an offspinner. For me, however, Croft will always be a cherubic fighter.

I never saw him bowl live in a first-class game, but through telecasts of Benson & Hedges matches and clippings in newspapers and Sportstar when in school in the Himalayas, found myself drawn to his pudgy offspinner. He just looked like he was having a great time doing what he did, never mind that the wickets columns rarely reflected anything special. I first read about Croft in 1997, when his picture found its place in the back pages of The Hindu and subsequently in Sportstar, after he took seven wickets in England's win over New Zealand in Christchurch.

There was his face, lit up in celebration after scalping a wicket, as his England team-mates rushed to Croft. Having not seen him bowl, I imagined how he bounded up to the wicket based on Ted Corbett's copy, of how he turned his arm over during a marathon spell of 39.1 overs, which resulted in career-best figures of 5 for 95 in just his fifth Test. The report in The Hindu spoke of how England's attack on the day had been wayward, but how Croft bowled with much heart and discipline, and there were words of praise from the coach, David Lloyd.

It was around this time that I myself took to offspin in a big way. I imagined myself as Croft, a smiling, gentle tweaker of the ball. Once I caught his action during a B&H match on Star Sports, I did my best to mimic it. Of course the results were nowhere as fluent and easy on the eye.

I did my best to follow Croft's England career. These were days when the Internet had not yet spread to our school, and so all I had to rely on were the newspapers and Sportstar. As the dailies mostly dedicated space to India, I relied mostly on Sportstar, and it sufficed. I read of how well Croft bowled on the tour of Zimbabwe, but then found his name wasn't taken as frequently. That meant that wickets weren't coming. 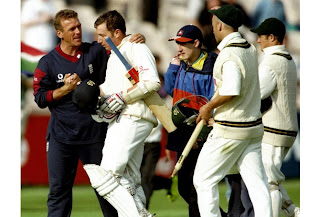 Then, in the summer of 1998, I went to London. South Africa were in England for a full series, and there was talk in the dailies of how Croft should be dropped. I knew he had not been in the wickets, and expected his name to be chopped from the squad. One day while at Lillywhites at Piccadilly Circus, I saw Croft, Nasser Hussain and Mark Ealham in the store for a promotional gig. Excited, I got into line and with a miniature bat which a relative had kindly purchased for me, handed it to the three England players. Here was the bowler whose career I had followed in Indian newspapers and magazines, and who I had not heard much of for a few months. Croft smiled his genial smile, asked my name, and duly scribbled on the bat. A week later, his name and pictures found their way back into the UK sports pages positively, because of his gritty innings at Edgbaston. However, an extended run of poor bowling form saw Croft dropped.

Back in India, and with the Internet now starting to become prominent, I was able to follow Croft's career on a regular basis. I did this while in college in the USA too, and eagerly checked the county scores to see what Croft was up to. He was in the wickets in a big way in 2000, and was recalled to play against West Indies. But he again failed, and was dropped. Croft spoke negatively of the England camp, only to blame "media misrepresentation" for the furor that followed. A few years later he was again recalled, for England's tour to Sri Lanka, but did nothing of note.

In early 2004 Croft announced his retirement, finishing his England Test career with 49 wickets at 37.24. As unobtrusively as he he had slipped onto the international scene, Croft stepped away. I continued to followhis county career closely, and was pleased when he captained Glamorgan to the one-day title in 2004, scoring 671 runs at 35.31 and taking 54 wickets at 34.55. I imagined him  plugging away, with that jump at the wicket and that animated celebration whenever he snared a wicket.


In 2010, at the age of 40, Croft became the first Glamorgan player to 1,000 wickets 10,000 runs. He still plays for his beloved county, and I recently saw him bowl a maiden in a Twenty20 match. Last week I came across a good interview with Croft on Star Cricket, one conducted by SKY's sports correspondent and one-time England batsman Ian Ward. It was a touching interview, with the affable and self-deprecating Croft talking about his illustrious career with Glamorgan, from chubby teenager to record-breaking bowler, and his stints with England. He was the same Croft, laughing and bubbly and keen about his craft and it was a treat to watch him chat about his career. Thanks for the memories, Crofty.