Skip to main content
- June 25, 2011
Haven't been able to get Harbhajan Singh's latest performance out of my mind. Yes, a good win for a new-look Indian side on a tricky surface, which that legend Rahul Dravid handled with customary determination. But watching Harbhajan return match figures of 3 for 105 against a sorry line-up when Devendra Bishoo grabbed 7 for 140 - including dismissing Laxman, Dravid and Dhoni in quick succession -  was tough to digest.

Here was a surface with bounce and turn - the two facets any offspinner will thrive on, and more so Harbhajan - but he failed to deliver. His line was all over the place: too many wide deliveries which the left-handers - and there were five of them in the West Indies side - could leave alone, and then an equal number of deliveries drifting onto the pads off a short length. The batsmen were rarely bothered. When Harbhajan switched to around the stumps, he continued to feed the batsmen on the pads. What offspinner thrives on that line? Coolly, the batsmen tucked runs off Harbhajan to the leg side. Too many to even recall, but there must have been a large percentage of runs scored to the on side. 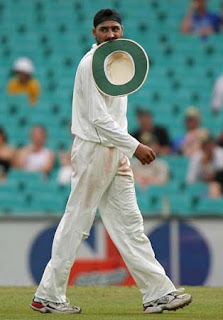 This isn't a new facet to Harbhajan's bowling. For too long he's done this. Watching Younis Khan reverse-paddle Harbhajan, on 99, in a Test in 2007-08 is the most accurate indication I can recall of how predictable a bowler he can be.

While watching Harbhajan's uninspiring display, I re-read this article by Harsha Bhogle from earlier this month, in which he called on the bowler to look deep inside himself and strive to become the "great" he was born to be. It got me thinking: what is so great about Harbhajan?

Ninety-four Tests, 396 wickets. That's a pretty good career. You don't get close to 400 wickets by being an ordinary bowler. But is Harbhajan destined to be great? Or is he an ordinary bowler who has achieved more than he possibly set out to at the top?

A friend - while informing me that Harbhajan is the fourth most successful wicket-taker in Tests over the last three years - put forth the argument that Harbhajan is a decent bowler who is judged too harshly by those who expect him to be great. All too often Harbhajan is the bowler people go after, citing his inconsistency and negative flat-on-leg-stump lines and lack of drift and turn. How many times have we read certain former India spinners criticize Harbhajan for not having a stellar series, or for "lacking heart", or for failing to put pressure on the batsmen? True, there are many average batsmen who have played Harbhajan with ease, and many instances where the conditions assisted turn and Harbhajan failed to do as well as he should and could have.

So yes, over the last three years, only three bowlers have taken more wickets than Harbhajan; in 28 Tests over that span he has taken 121 wickets at an average of 33.78 and strike rate of 71.50. Not the figures of a "great" bowler by any means. Over the last 12 months, Harbhajan has taken 41 wickets in 11 Tests (average 39.95), with one five-wicket haul, in South Africa.

There is an argument that Harbhajan does better on wickets that are hard and bouncy, and his returns in India's last two overseas (outside Asia) tours, to New Zealand and South Africa, give credence to this. Harbhajan bowled very well in New Zealand in 2009 and, after a poor first Test in South Africa in late 2010, did well in the remaining two fixtures with 13 wickets. After the drawn series in South Africa, Harbhajan admitted he had adopted Graeme Swann's wicket-to-wicket line which yielded 21 wickets in four Tests in 2009-10. So, you need to look at another offspinner to figure out that a wicket-to-wicket line is key to taking wickets? After 13 years of international cricket? It shows a little into Harbhajan's thought process, and its scary.

When New Zealand toured India in late 2010, Harbhajan publicly lashed out at the lifeless wickets provided in Ahmedabad and Hyderabad, but clearly failed to notice how well Daniel Vettori bowled on those same tracks. Bowling to far greater batsmen than Harbhajan did, Vettori varied his pace and flight to compensate for the lack of turn; Harbhajan, by contrast, pushed the ball through flat and quick.

Test cricket's current leading wicket-taker isn't destined to be great, but a Test bowling average of 31.87 surely proves that. The 30-mark is generally taken as the cut-off between great and good/average Test bowlers, and Harbhajan has some work to do to get his figures below that point.

Brian Carpenter said…
And things certainly haven't got any better in England.

I wonder where his career goes from here?
3:19 AM