- October 23, 2010
This post on Cricinfo about Owais Shah and the limits of talent made me chuckle. Another hero has fallen. Or so another cricket romantic would like you to believe. The Brits, in particular, like to talk (a lot) about sports and can talk about practically any player, match, manager, coach, physiotherapist, ball boy, bus driver and ticket vendor with equal ferocity and passion and disbelief. I have read, seen and heard this on many an occasion. Brit sports fans love to dissect and analyze, but most of all - apart from wallowing in their room temperature beer and feeling sad about themselves - they like to romanticize the failed genius. There is no greater example of this than Mark Ramprakash. The batsman, not the dancer. 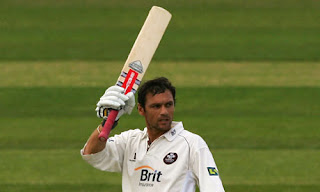 Each April, as the winter gives way to spring - well, not spring, but a somewhat overcast and gloomy summer - and the bats and balls come out, talk of Ramps reaches a crescendo. How many centuries this season? Will he help Surrey avoid relegation? Surely, now that he's past 40, a recall is due? Will he catch Osama? Can he resuscitate the global economy? Folks, he was never going to be recalled for The Oval Test.

Ed Smith, another batsman from whom much was expected, summarized Ramprakash's dilemma succinctly:  "The clouds of professionalism descended, and viewing what he did as a job made Ramprakash less good at doing it." Simple. Shut it, move on. The Ballad of Mark Ramprakash is not going to be made into a BAFTA-winning feature film.

There have been many others that have been dissected and romanticized. Graeme Hick, anyone? Hick loyalists will gladly tell you that his three half-centuries in the 1992 World Cup, after a poor contribution to Worcestershire's Bensen & Hedges Cup triumph, helped England reach the final. That Hick topped England's batting and bowling averages on the our of India in 1992-93, scoring his maiden Test hundred. That he averaged 46.44 in Tests between 1992-1995. That in 2001 Hick scored 200* against Durham, completing the set of having made first-class hundreds against all 17 other counties, both home and away. That in 2008 Hick became the most prolific run-scorer in all cricket, with more than 70,000 runs to his name, and the first player to play in more than 1200 games. And that Hick's tally of 136 hundreds ranks eighth on the all-time list.

But if you look at it objectively, was Hick really an enigma, or just a flat-track, front-foot thumper? He had a record-breaking career with Worcestershire but never fulfilled his potential with England, but the man himself has admitted he didn't have "the ruthlessness" to cut it at the top.

Like England, India too went through a phase of promising so much and then falling flat. Refer to the 1980s.
Indian cricket's three biggest stars of the Unfulfilled Talent category are Vinod Kambli, Sadanand Viswanath and Laxman Sivaramakrishnan. But instead of a legion of hopeless romantics, its these three who you'd most likely find with their faces in a beer talking about what could have been. We know have to deal with Siva from the commentary box, mind you, and Kambli on Sach Ka Saamna. This after Kambli tried his hand at film. It is not so much romantic as comedic. 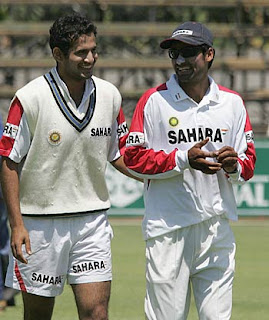 Sitting in the stands at the PCA Stadium watching Kings XI Punjab open their campaign in the last IPL season, it was poignant to see three of this generation's most promising players all in the same floundering team - Yuvraj Singh, Mohammad Kaif and Irfan Pathan.

Yuvraj should have sealed a place in the Test middle order years ago, while Irfan fell victim to the dangers of rapid promotion, having been elevated into the national team far too prematurely and then jettisoned just as he was coming to terms with his game. He has now been given the epitaph "former future Kapil Dev". And Kaif ... well, a friend and experienced journalist once termed "India's Michael Chang" - super fit, always buzzing around, just never going to go anywhere - and I think that says it all.

No romanticizing these three. Lets leave that to the Brits.