Awesomely bad songs with even more awesomely bad choreography. Everything glitters and flashes. In case you weren't blinded by the excess silver and white costumes, the "chew chew chew" laser effects sure did. Even Liberace would have hid for cover. Flashing lights, mirrors, shiny disco balls, skintight (male and female) costumes and stiletto white boots are the norm here. Only Mithun could make Disco Nite an event where men and women aged 18 to 88 could all clap and sway in unison while he dazzled them with his headgear and footwork on stage. Is your eight-year old daughter bored of the usual Saturday evening routine of Snakes & Ladders or Antakshari? Well then come on down to your nearest auditorium and let Jimmy put a smile on her face and a twist to her hips? And don't worry, even Nani and Nana can join in for some wholesome family entertainment.

If you've seen Disco Dancer, you know what I'm talking about. If you've not, you're missing something. If you're hesitant, here are 18 (the age this film will make you feel again) reasons to go get a copy of this movie, apart from the obvious - that Mithun can dance, that Bappi da's music rocked, and that disco will never die. 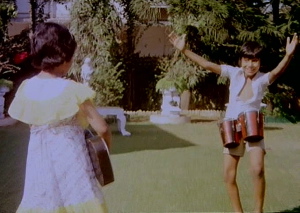 1. An aging and overweight Rajesh Khanna grimace his way through 'Goro ki naa kaalon ki' and the kid playing Mithun as a kid strumming that miniature guitar like there's no tomorrow while lip-synching  to Usha Mangeshkar. (I have to add here that sitting in a little seafood joint in Galle after covering a day's Test cricket, and looking up to see this very song dubbed in Sinhalese comes very close to a liberating experience, but the original Hindi version is the best).
2. Mithun's Jimmy dancing down a bridge and getting discovered by Om Puri's David Brown, who just happens to be standing under a streetlight waiting for the next dancing sensation to hot-step into town.
3. Tun Tun as the Catholic bride about to marry a little person. About the only intentional comedic scene in the film. 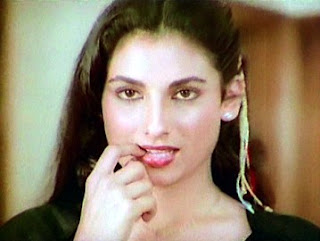 4. Kim, that vintage 80s bombshell who was never far from Mithun's arms and who became Danny's woman.She definitely ain't Lil and she most definitely ain't no Kardashian, this desi dhamaka. Note the scene in which, smitten by our hero's humility rather than his song and dance routine, she comes to reconcile. "Autograph book kahan hai?" asks Jimmy, to which Kim puts a finger to her rosy red lips and pouts suggestively. Or the scene in which, clad in very short denim shorts, she helps Jimmy start walking again on the beach. Medical marvels be damned, those legs could have made crippled men leap into the Bay of Bengal.
5. The West Side Story-inspired snap-fight scene. Dude, don't ever smash Mithun's guitar. He'll snap-fu your ass right there.
6. Jimmy, in a daze because of Guitarphobia (best medical jargon in Hindi cinema since lymphosarcoma of the intestine. Any coincidence that Kaka was in both films?) on stage in a poncho. A poncho. Yes, a poncho. No, really, a poncho.
7. Om Puri as David Brown. Still can't figure out what he was doing in this film. Must ask him someday.
8. David Brown, after Sammy throws a glass of wine in his face, wiping himself and telling an apologetic Nikki: "Its alright, kid." Listening, Mr Bogart? 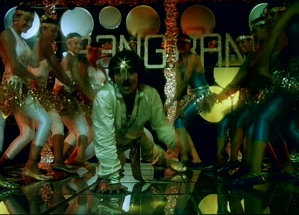 9. Karan Razdan's Sammy - on debut - and Kalpana Iyer's Nikki gyrating to 'Auva Auva, Koi Yahaan Naache' - a blatant rip-off of 'Video Killed The Radio Star'. Shiny silver costumes? Check. Shiny headbands, male and female, to match? Check. Pointy silver boots, male and female? Check. Awkward dance moves? Check. Fans going wild? Check. All that glitters is not gold, let me tell you. Bang Bang!
10. Sammy cutting a phone call between Nikki and her father David Brown by pressing down on the receiver with his toe. Umm, now that's a moment in world cinema, Vidhu Vinod Chopra.
11. Jimmy in that garish winged costume dancing to the tunes of 'Krishna Dharti Pe Aaja Tu', sung by the one and only Nandu Bhende. It took a while to grown on me, but what a trippy song. Salaam.
12. The scene just after the 'Krishna' song where David Brown shouts: "Jimmy, YOU HAVE DONE IT!" and Bombay is instantly consumed with Jimmy fever: Jimmy ice cream! Jimmy chocolate! Jimmy fabrics! Jimmy T-shirts and perfumes!
13. As part of the same montage, the scene where a husband and wife are shown lying in bed. The husband, thinking his wife, is asleep, turns around and from under his pillow takes out a picture of a bikini-clad bimbette and kisses it. The wife, waiting until the husband closes his eyes, takes out a picture of Jimmy and kisses it. A true WTF moment. 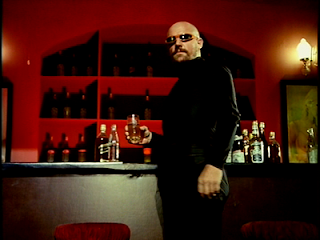 14. Good ol' Bob Christo's entrance. Hired Goon 1 is sitting with Nasty Rich Father. Looking toward the bar, HG 1 says to NRF: "Oberoi sahab, yehi woh aadmi hai. Saala saath khoon kiye hai London mein. Aur ek bahut bada singer hai. Apan ko uska naam nahin maloom. Uska bhi issi ne khoon kiya. Saala top ka criminal hai." NRF pulls on his cigarette and looks ahead very intently. Cut to Bob, who turns around from the bar, scotch in hand, dressed fully in skintight black (turtle neck, mind you) and shades, and walks into the frame.
15. Bob's legendary "Iski taangein tod do" line. You'll go weak in the knees.
16. The world-famous in India "Internationalntie Of Dance Competition" (Yes, that's what the sign says) at the climax where, drum roll, the superbly named "Disco King & Queen Of Africa," who appear to be a Kenyan law student with loose motions and a stoned air hostess.
17. The scene in which NRF sees his heroin-injecting collapse son Sammy at his feet and doesn't so much as flinch. Instead he mutters to the camera as it zooms in, vowing that he won't let anything happen to Sammy. Bhai, baap ho toh aise.
18. The Guitar of Death. I won't say more, except that it's a shocker. No pun intended.

anil said…
And who but Bappi and Subhash can make a song out of A O Aah and a pair of sandals! Genius!
9:12 PM