Skip to main content
- October 28, 2010
"Cricket is at first and foremost a dramatic spectacle. It belongs with the theater, ballet, opera and the dance." So wrote CLR James. James never got a chance to see Virender Sehwag bat, but if he had, he would have decreed Sehwag's batting as one of the greatest pieces of evidence for that statement.

Another channel-flipping session last night. Of the lot, Sehwag at the MCG in 2003-04 was by far the best. Audacious innings. Sehwag is a spectacle. There is no better word to describe him. He provides the theatrics day in an day out, be it by slicing a short ball over third man for six in the first half hour of a Test match, pinching a frenzied single to move to 93 in the over before lunch, or by moving to 300 with a six. A twinkle-toed drive off a spinner through extra cover is to behold beauty. A similar shot against a fast bowler, on dancing feet, is to submit yourself.


Sehwag isn't all ferocity. Even in picking up a single he can be audacious. But it is his nonchalant determination and ability to score in any condition that sets Sehwag apart. His batting against Sri Lanka, albeit on a flat track, at the Brabourne in late 2009 was of a different world. My father, who sat in the stands during that phenomenal innings, said it was the best batting he'd seen live since Tendulkar's double-century for Mumbai against the Australians at that same ground in 1998. 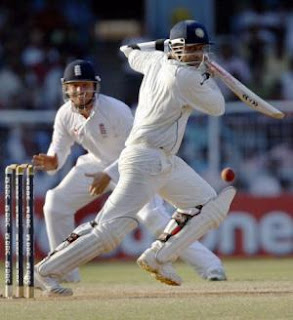 Ian Chappell, who once termed Sehwag "the greatest destroyer since the U-boat", has his three S theory of Sehwag, others have created a terminology. In 2008 Sehwag's Test strike rate was 85; in 2009 he scored his Test runs at over a run a ball. After Bradman, only Sehwag has crossed 290 more times in a Test.


"The moment I hit two or three boundaries in an over, they spread the field. If you are lucky, if I make a mistake, then I will get out," he said in that customary matter-of-fact manner during the Sri Lanka Tests this past summer.

Today, a typical field for Sehwag will include a deep point, fine leg, square third man and leg gully. The ball will be banged in at his ribs. He will hop across and work the ball of his hips. Most times it will fetch him runs. Sometimes he will find the man at deep square leg. Many time she will upper-cut the ball deliberately in front of that deep point fielder.

There was a time when Sehwag didn't get that left foot across in the line of the ball. He would go hard at the full and inswinging deliveries on middle and off or thereabouts. He would most likely stay beside the line instead of getting behind it. Today he gets inside it a lot more. He isn't as susceptible outside off anymore. He plays a lot more on-side shots. He admits he isn't a good hooker or puller, but he's made his own ways of scoring.

That he puts away length deliveries on the rise, with disdain and regularity, is another matter. Sehwag doesn't hurry to get to the ball, rather he hangs in his crease with a bit of a movement back. His bat speed is terrific, much like Adam Gilchrist's and Mark Waugh's, and it is that lack of footwork that actually allows him to negotiate reverse swing. Rarely is he cramped when going for the ball. If he is, he relies on that same bat speed and ferocity of wrists.

Sehwag has had to battle a few demons along the way. He has had his ODI woes and short-pitched woes. But he has always come back hard, worked on his shortcomings, and trusted his instincts. Australia, South Africa and Sri Lanka have most recently tried all sorts of tactics. At times they have succeeded, but most likely Sehwag has come out on top. Most recently he was the target of a bouncer barrage in Bangalore and fell to the trap, but it made for fascinating viewing. And you know Sehwag will have his revenge of Australia. That's what is so endearing about the man. He won't give in.

When he knows its going to come at him short, Sehwag goes deep. He doesn't shy away from pulling in front of square. There will be days it doesn't come off. But that's the rush of watching Sehwag bat. Technique is irrelevant.

Brian Carpenter said…
A great player. One of the very, very best.