- August 07, 2007
Helping a friend and colleague form a Sachin Tendulkar quiz, I popped the question: "Sachin Tendulkar was the first player to score 10,000 runs in one-day internationals. Whose record did he break?" The answer, of course, is Mohammad Azharuddin. I wanted to see how many ODI runs Azhar finished with, so I went to his player page, and soon found myself looking through images of him. It brought back memories of a batsmen I used to love to watch. Forget Tendulkar, on his day, Azhar was the man to watch.

I didn't watch cricket when he scored those hundreds at Auckland, Lord's and Old Trafford (England couldn't stop him from the moment he made his debut) early in his career, but how can I forget that century against South Africa at Eden Gardens, off just 74 balls? India up against it, 119 for 6, and then bang! Lance Klusener is hit for five successive fours as he tries to pepper Azhar with the short stuff. Or the hundred in partnership with Tendulkar at Cape Town? Or that 108 on a seaming, first-day Wellington pitch in 1998. Alas, these hundreds all came in losses. 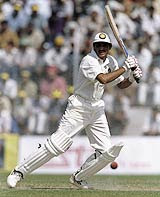 
Time and again, the way he would make you think he was going to fall over, but then like some oriental master, placed, not flicked, the ball between square leg and midwicket with a delecate roll of the wrists. More times than not, the ball sped away to the boundary from the impact of those magical wrists.

Then there was his assurance, the way he strutted to the middle, collar up and taveez hanging out from his unbottuned shirt, looked around at the field, and refused to get bogged down by a crisis. I have memories of Azhar putting wrong back to right, or atleast a score defendable by the bowlers, who invariably cocked up. The way he would build an innings, sweetly adding single by single, boundary by boundary. He wasn't a great runner between the wickets, nor was he a natural lofter of the cricket ball. His forte was playing along the ground, the purer, safer way. Yes, he would some big sixes to send the crowd into raptures, but I liked Azhar when he flicked it along the ground, or drove, front foot moving forward just slightly, with his tongue protruding. That was an artist at work.

He had his issues against pace, especially the rising delivery, but he did dismantle Klusener, a tearaway on debut, and Shoaib Akhtar in the height of his pace, in the 1999 World Cup, making room and thumping the ball through the off side. Against spin, he would take it from out in front of his pad and turn it away, finding the gaps with ease.

I remember two one-day innings of 81 in the Asia Cup of '97, when he forced his way back into the side after being dropped. The was a hunger in the way he batted, but the elegance masked the anger, thankfully.

These memories crashed down when the match-fixing scandal broke and Azhar was banned for life. Someone who appeared so decent and dignified had fallen from grace. I was numbed and still am.

But I wouldn't mind seeing that flick to leg just one more time.

Abhik said…
Perfect. Azhar was a magician, perhaps among the last ones on the cricket field.
I'm probably advertising myself, but would be nice if you have a look at my post: http://andthusspakeabhik.blogspot.com/2007/06/mortalized-immortal_15.html.
Nice cricket-centric blog.
10:47 AM

Brian Carpenter said…
I am old enough to remember the Lord's and Old Trafford innings in 1990 (and the three centuries in his first series, although there was absolutely no TV coverage in the UK).

At his best - in English terms in one of those innings, probably Lord's - he was an absolute magician.

And so rarely talked about today.
3:30 AM