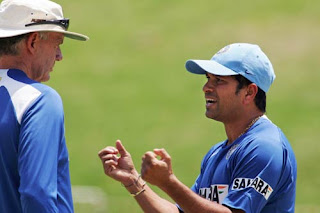 Greg Chappell has resigned. Wow. For Sachin Tendulkar to speak out was unthinkable. He's never uttered a word his entire career. Chappell spoke/leaked information to the media many times. Sachin spoke out once in his career and Chappell is out. Amazing. But Indian cricket is in for a torrid time. I hope the selectors have the guts to relieve Rahul Dravid of the captaincy, get Sourav Ganguly, Sachin, Virender Sehwag and Harbhajan Singh out of the one-day side, and bring back Mohammad Kaif. India's fielding/fitness is abysmal. There is no way they can compete in the field with Australia, South Africa, New Zealand and Sri Lanka. Their bowling is shoddy, perhaps above just West Indies and Bangladesh, from the Test sides, though even a bowler like Darren Powell took 2 for 35/40 every match of this World Cup.

Fitness must be assessed. It is the way of the future. Now is the time; wipe the slate clean. Get rid of any unfit, uninspiring, potentially disruptive elements (most of the names I've mentioned above). Fitness is key in the modern game. You can get away with more in the Test arena, so keep Ganguly, Sachin, Sehwag and Harbhajan for that. The ground fielding, barring Yuvraj Singh, is hopeless, worse in the deep; the throwing is the worst in international cricket. Did you see Ireland field yesterday? The four top teams save 30-40 runs a game. 30-40!! Thats an insane margin in cricket. India dont do that.

See, all these big guns will go sooner than later. You had to build the team for the future at some time. Do it now. We all know there are no replacements for Sachin. Get youngsters. Get youth. Get a new captain. Let India lose for a year, but BACK your captain, back your players, back the youth. This is the best thing to happen to Indian cricket, this mess. Its time we make changes. Get your Tiwaris, Rainas, Kaifs, Yo Maheshs, Sharmas, whoever. They're raw, they're over-rated. Leave it. They're enthusiastic. They're fit. They have no baggage. They're the future. Do you want to persist with Ganguly, Dravid, Sachin when they're not even going to see the next World Cup? What more do these three have to prove in the one-day game? They blew their shot at a World Cup title. They have over 10,000 runs in one-dayers. Stick to Tests. Revamp the one-day side. Send a bunch of rookies to Bangladesh. Let them lose. Let them try. There's only one way from this mess - up. And you arent going to do it with the bunch of crocks in the field you have. The big three, plus Sehwag and Harbhajan, are liabilities in the field. I think, now, in hindsight, that maybe Chappell's 'Vision of Excellence' was to get rid of Ganguly, Sehwag and Harbhajan as they were unfit, uninspired and disruptive. Maybe we judged him wrongly on that. He knew, more than anyone else, that youth and extreme fitness was the way to go.

A new dawn beckons. Lets hope the management and selectors can see it.