- April 11, 2007
The Super Eights are getting pretty interesting. New Zealand lead the points table, Australia are surefire semi-finalists, and Sri Lanka - hit hard by the injury to Lasith Malinga - will also sail through. Its at the bottom that it gets interesting. South Africa have two wins, and England and Bangladesh each have one. The West Indies are virtually out of the tournament, having failed to win a game in the second phase.

While we've seen some success stories, there have also been some big flops in this World Cup.

1. Justin Kemp - Looks a decimal point of the hard-hitting batsman he is. His bowling is useless, so he plays as a specialist batsman in the lower middle order. Still cant buy a run. Looks so out of play when he comes in and early, and if he's there to have a swing, he's a waste in the XI. South Africa have the likes of Shaun Pollock, Mark Boucher and Andrew Hall to do that. 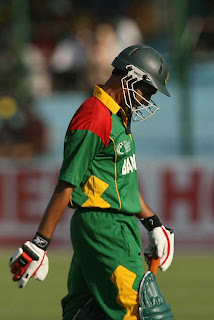 2. Habibul Bashar - Six games, five innings, 57 runs, a best of 24, and an average of 11.40. Throw in a strike rate of 42.85 and you have a captain struggling to make an impact. True, Bangladesh have stunned many by making the Super Eights, and beating India and South Africa, but Bashar's contribution has been absolutely minimal. His slowness in the rain-reduced smashathon against Australia ate up valuable time and deliveries. With games against England, New Zealand and West Indies lined up, his side could sure do with a handy score from him.

3. Michael Vaughan - He's never looked like a one-day batsman, but this is ridiculous. Back as captain after a long time on the sidelines through injury, Vaughan's captaincy has been jaded, but its inability to get bat on ball that's hit England the most. He hasn't even lasted long enough to see off the new ball, as 83 runs at 13.83 indicate. Years ago, another England captain, Mike Brearley, also an opener, famously struggled in the 1979 World Cup. Vaughan would do well to atleast emulate Brearley's ability to get the best out of his star allrounder (a certain Ian Botham)and get Andrew Flintoff out of the water and onto the park. A failure to qualify for the semi-finals could spell the end of Vaughan's one-day career.

4. Flintoff - Speaking of the big lad, his batting contributions have been, to put it in the words of Lawrence Booth, much like a curate's egg. 49 runs in five matches, of which 43 came against Ireland, is not what you expect from your best player. In the Super Eights, Flintoff has failed against New Zealand (0), Sri Lanka (2) and Australia (4). England next play Bangladesh today - a match they must win to retain any realistic hope of reaching the semi-finals - and Flintoff could well do with some runs. 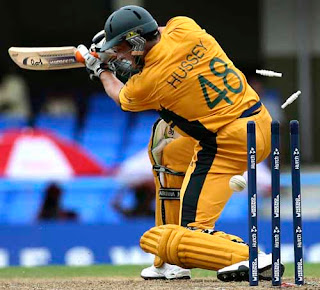 5. Michael Hussey - Six matches into Australia's campaign, and Hussey has still not got into any semblance of form. He hasn't even gotten to double figures. True, he hasn't had many overs to bat when he's come in - the longest he's had is 15 overs - but he's failed to replicate his phenomenal form of late. Australia’s batting strength is such that Hussey’s place in the side has not been seriously questioned. Still, runs are missing.

6. Chris Gayle - The way Gayle plays, blow hot blow cold, you can expect him to fail a fair bit. But his World Cup form has been alarming. The stage was set for him: home conditions, small grounds, Powerplays, and the fact that he was such a success in West Indies' recent exploits. But his bat hasn't uttered a word, and his tidy offspin has been somewhat pedestrian. Much was expected of Gayle, but he's had a tournament he'd like to forget.

Cometh the hour, cometh the Onion

- December 21, 2009
What. A. Session. West Indies didn't survive in Perth but England somehow did in Centurion. Cracking last session. Friedel de Wet, take a bow. At about 5pm South African time, with England four down for about 200, the mood was bordering on dull as the on-air commentators discussed the selection conundrums for both sides ahead of the second Test, with a lot of chatter about whether South Africa should drop de Wet or Ntini for a fit Steyn. There was talk of Ntini's ability to swing the ball away from the left-handers if he found assistance in Durban, but also of how impressive de Wet had been on debut, especially the longer he bowled. Then, in eight overs of the new ball, de Wet turned the game on its head and the commentators were salivating. Tremendous effort by the debutant. Unlike Ntini, he made the batsmen play. That's all you need to do in such situations, and a false shot or two is bound to occur. Sure enough, a solid Trott was done for bounce, the ball skimming the
Read more