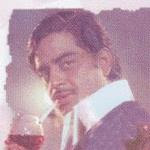 At 2:48 in the morning, one of my flatmates bangs on my door like the Chinese have invaded, all because Lasith Malinga took four wickets in four balls. Lovely stuff, except I couldnt get back to sleep. And I had to be at work by 8. Ended up staying awake.

Anyway, another surfing session brought me to the opening scene of a film called Vishwanath on Sony Max. Its probably the first Shatrugan Sinha flick I've sat through. Its a decent film, veteran film-maker Subhash Ghai's second. Apparently it was a big hit when it released in early 1978.

Ghai has always turned out potboilers, with big stars, lavish sets and hit music. It proved to be his downfall as a director as the years turned over and Indian cinema awoke to the benefits of technology and professionalism on the sets. To sum up, Ghai realized this too late and his last few films have been pathetic. He was a master of the VHS era; he couldnt keep in touch with the DVD generation. In 2005, he opened a center called Whistling Woods International Institute for Film, Television and Media Arts, but I dont think thats going to have any effect on his own film-making skills.

But back to Vishwanath. Considering that Ghai's only film before this, Kallicharan, was made without any directorial experience, this movie wins on a few accounts. First, thought its fairly stereotypical of the era it was made in - there are devilish villains, there's a rape scene, murder, the oppression of the poor, the corruption of the law and its upholders - thats all in keeping with the plot. And Ghai doesnt give you an overdose of it all. Its weaved in well, probably because it was his second film and he the fame wasnt to his head yet. Sinha plays the title role, an honest lawyer implicated and imprisoned by the influence of a powerful don and his cronies. Vishwanath gets out and tries to take revenge, but cant beat the corrupt system, the same system he fought for. So he changes his identity, forms a band of vigilantes - read assassins - he befriended in the slammer, and plots revenge. However, he loses his girlfriend, his widowed mother is killed, and he becomes a wanted man.

Second, it dares to take a very unconventional face like Sinha's and turn it into star material. On the wrong side of the law, Sinha gives glimpses of what would become his trademark style - thankfully, he doesnt get to the "Khamosh..." and "Abe Chapadghanchoo" level - but in the initial reels of the movie, before his conviction, is where Ghai manages to underplay him. It works out well too. There's no hamming, no lengthy dialogues. Sinha restrains himself and sets up the contrast for the second half. As the man carrying out his vendetta, Sinha doesnt go overboard, despite the loopholes in the script.

As a revenge story, the violence is limited. Comedy is interspersed with Pran's antics, but doesnt interfere with the plot. The songs slow the film down and have no scope in the plot, but then its Indian cinema and its the late 70s. Most people ham, the background score is typically heavy, but the camerawork is impressive for that era. The editing, done by the legendary Waman-Bhosle, is pretty slick.

Its not a great piece of film-making by any regards, but I think it would've stuck out at the time of release, and riding on Sinha's shoulders was probably a different movie to watch back then. It proved that you dont need big stars to make a hit film. There were much bigger films, made by establish names and with established stars and music by top composers, that failed to rake in the big bucks in 1978 - Shalimar (Dharmendra, Zeenat Aman, Shammi Kapoor, Dev Anand's Des Pardes, Raj Kapoor's Satyam Shivam Sundaram. That Vishwanath raked in the same kind of money as the Amitabh Bachchan classics Don and Muqaddar Ka Sikandar in the same years says something about this relatively small-budget film. This isnt the only such instance of a smaller film trumping the hyped, big-budged, multi-starrers. Think November 1991, when Yash Chopra's magnum opus, Lamhe, released simultaneously with the unheard of Kuku Kohli's Phool Aur Kaante, starring two debutants, Ajay Devgan and Madhoo.

And yeah, Vishwanath kept me awake till dawn.

Let me leave you with a filmi line from the film:

Kanishkaa said…
can you mention the name of the guy who banged on ur door please!!
9:23 PM