- March 01, 2007
Just got back from a very, very short break in Mussoorie. Went up with three friends from work - Sriram, Sid and Monga - and an old friend from school, Ronjoy, and his girlfriend, Farrah. 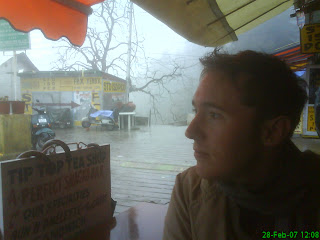 Had a great time. My cousin Shibani was up there as well to add to the madness. Weather was nice and cold, it rained too, and we did nothing but eat, drink, play cricket, gamble, hit the old haunts, and eat at char dukan every day. Awesome.

Preya said…
You see my grandparents more than I do; that's just not right!
6:19 AM