- March 18, 2007
On the very day that Ian Chappell criticized the World Cup participation of minnow countries, in his column for Cricinfo, Ireland knocked Pakistan out of the World Cup and Bangladesh shocked India in their first game with a five-wicket win.

Bangladesh aren't minnows anymore, as wins over India (twice), Australia, and Sri Lanka prove, and the dedication with with they approached yesterday's game was immense. Its a telling statement on the hard work done by the untiring Dav Whatmore.

You had three kids - 17, 18, and 19 - scoring valiant half-centuries. You had Mashrafe Mortaza, 2006's highest wicket-taker, bowling some great deliveries and getting four; you had Syed Rasel backing him up in an unbroken ten-over spell; you had the great Mohammad Rafique, getting Rahul Dravid with his first ball; and you had the ever-improving Abdur Razzak, teasing and turning the ball. This was the best I've seen Bangladesh play.

Before this game, they'd only once beat India in 14 meetings. At the 2003 World Cup, they didnt' even win a match. But they came into the game with 17 victories from their last 20 matches, albeit against lower grade opponents, and brought their A game with them. They've shocked many inside the cricketing fraternity, and left India with a damn hard job to do. 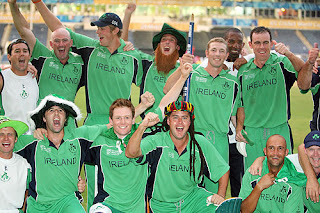 And Ireland - come, let's cheer for them. Understand for a moment that the Ireland side is made not of centrally contracted, full-time professionals; no, they are a heary group of individuals with jobs who play in their spare time, for the sheer love of the game. Put that into perspective, and the beauty of their win over Pakistan, the fourth-ranked side in the world, with an years of international experience, a successful (but soon to be sacked) coach, and access to top-class fitness and training opportunities, not to mention a very good amount of money.

What joy they felt as they lapped Sabina Park, heroes for all to see, cannot be understood. St. Patty's Day couldn't have been sweeter. It was a day that each of those guys will retell countless times, to friends, family, grandkids, whoever.

These two wins have changed the complexion of the World Cup. Pakistan, who looked like crap, are gone. Bob Woolmer continually stressed that he had a good enough side to be very competitive at the World Cup, but the truth told in the end.

India, who played pathetically, now need to win their remaining two games to make sure of advancing, with the clash against Group B favourites Sri Lanka on Friday looming a virtual semi-final.