- March 30, 2007
Okay, so you probably think all I do is watch cricket and movies; more hindi movies than English, too.

While sitting at work entering some tour diaries and covering the latest update in the Woolmer murder, one of the production chaps chose Sony Max to try out some new video recording stuff, and mixed work with pleasure by recording the better half of Ram Lakhan. A classic Subhash Ghai (no, I'm not a fan of his, this is just coincidence) potboiler from the Eighties, this movie had it all. This was the biggest hit that the Anil Kapoor-Jackie Shroff combo had, though they combined for many better movies.

Watching the two of them, young, handsome, fit and in their prime as heroes, made me wonder about their longevity. Both debuted well over 25 years ago (Kapoor in '79 with a bit role in Hamare Tumare, Shroff in '82 with a similar role in Dev Anand's Swami Dada) and are still ticking in 2007, though in very different modes.

Kapoor is at the top of his game, while Shroff has been reduced to cheesy roles in small budget films and the odd decent production. Kapoor is fit, healthy and hasnt had to do any dance appearances or flaky kid or C grade movies. Shroff is overweight, wears awful clothes, drinks a lot, had a couple weave jobs, his financial situations have been off the Richter, and never does he reveal his baggy eyes - he's always under the protection of shades.

Kapoor has stayed clear of controversy, too.

Career-wise, he's put in some of the best performances of his career in the last seven or eight years. Check out Taal, Armaan, Om Jai Jagdish, Calcutta Mail, Bewafaa, Musafir and, to me his best work to date, My Wife's Murder. Barring the last, none of these are excellently written or directed movies, but without Kapoor, they would have been terrible. He's matured as an actor. He can restrain himself superbly (Om Jai Jagdish, Bewafaa), ham it up (Taal), emote (Armaan), and encapsulate a gamut of expressions and emotions without going over the top (Calcutta Mail, My Wife's Murder).

He's proven quite a hit at comedy, the most striking achievement over Shroff. Films like No Entry and Biwi No. 1 have shown this, and he's been decent at action in latter years.

Let me get back to My Wife's Murder for just a second. This is very well-made, taught movie. Very engaging. Debutant director Jiji Phillips did a damn good job. But Kapoor - wow. In this role, he conveys the various shades - trauma, ordeal, despair, depression, anxiety - with such precision. A film that attempts to explore the mind of a common man who accidentally murders his nagging wife was a first in Indian cinema, and Kapoor a perfect choice for the role.

In another 'hatke' movie, Musafir - a rip-off of Oliver Stone's U-Turn, Kapoor does Sean Penn's character Indian justice when you understand the parameters of Bollywood. The film is his, start to finish. Its an authoritative performance, and this time around the casting is daring. Its a role that Kapoor was used to pulling off in the Eighties - the rugged, stubbled, I-care-a-damn petty thief - but to do it at this age, when expectations have soared and in a camp that he was new to, Kapoor is brilliant. Second just to My Wife's Murder as far as his roles go.

He's been offered a range of roles in recent times, and never disappointed.

Now, to Shroff. His recent movies include Eklavya, Bhagam Bhag, Bhoot Unkle, Mera Dil Deke Dekho, Naksha, Apna Sapna Money Money, Divorce: Not Between Husband and Wife, and Kyon Ki. Seen, or heard of any of these? I've seen four, and barring Eklayva, which he only got because of his long-standing friendship with director Vidhu Vinod Chopra, they were useless, unfortunate roles in very mediocre movies. While Kapoor was done films with Nikhil Advani, Dharmesh Darshan, Sudhir Mishra and Indra Kumar in the last few years, Shroff has had to work with Aneesh Arjun Dev, Rohit Kaushik, Sachin Bajaj, and MJ Ramanan - who??? - to name a few. True, there was a good role in Rituparno Ghosh's Antar Mahal in there somewhere, and Nagesh Kukunoor's Teen Deewarein, but thats two decent directors he's worked with in a long, long time. Count the number of films he's done with Mithun, and you feel sad for a man who was a box office draw in the 80s and early 90s.

There were some good roles along the way, don't get me wrong. He carried the misinterpreted Dobara tremendously - I'm going to put this role up their with Kaash and Parinda - restrained himself commendably in Samay, and emoted well in a clanger like Yaadein. Unfortunately, he made a mess of the role of Chunnilal in Sanjay Leela Bhansali's adaptation of Devdas, going way over the top and taking hamming to a new level.

It's sad to see him playing buffoons in films like Naksha and lost in comic capers like Bhagam Bhag. He doesnt do comedy, and wasn't ever meant to. His forte was always drama and action. He became a star with Ghai's aptly titled Hero, and was meant to be one. I don't know the reasons for his choosing all these rubbish movies in the last decade, and I don't want to speculate, but its clear he's made bad, bad decisions.

Interestingly, Shroff and Kapoor were a star pair in the 80s and 90s. Shroff's third movie, the 48 Hours-inspired Andar Bahaar, was the first time the duo acted together, then there was Yudh, then there were Ghai's blockbusters Karma and Ram Lakhan, and the best film they both starred in, the superb Parinda. Thinking of this movie, maybe the two should seriously be brought together. It would make for quality viewing, and having Kapoor opposite him might just inspire Shroff to turn in the performance many have been waiting for. 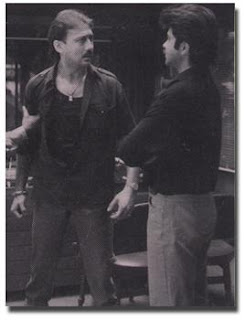 After Parinda, Kapoor and Shroff did Kaala Bazaar in the same year, 1989, but then didnt come together until four years later, in the mega flop Roop Ki Rani Choron Ka Raja. The chemistry was there, but the two were different towards each other. Chopra brought them together in 1942: A Love Story in the same year; then they did together was Ghai's production Trimurti, which sank without a trace; their last film together was Priyadarshan's confused Kabhi Na Kabhi in 1998, if you dont count Rajkumar Santoshi's Lajja in 2001, in which they didnt share screen time.

Some people suggested Shroff got sick of playing the secondary hero; there was a sick rumour doing the rounds at the time of Parinda that they were more than good friends; other say they couldnt cope with the pressure of acting opposite each other.
Whatever the reasons, I'll always remember the two for their memorable films and intense camaraderie.

If only Shroff was playing his A game like Kapoor was today. It would've made for an intense rivalry all over again, viewers could've been treated to more quality films, and some of the upstarts calling themselves heroes these days would've fallen flat.

Preya said…
I think Ram Lakhan is the only Hindi movie I've ever really seen and understood (probably from having seen it a million times); I was completely obsessed with it and Anil Kapoor as a kid. I know all the songs by heart (still). Finally, something on your blog I know about!
12:33 PM