- March 10, 2007
The best thing to happen ahead of the World Cup was the five consecutive defeats Australia suffered at the hands of England and New Zealands. It broke the aura of invincibilty that surrounded them.

Warm-up games, especially those against minnow nations, don’t tend to be taken too seriously but we’ve been given a glimpse into how things will pan out in the World Cup.

India beat the Netherlands and West Indies, but Virender Sehwag still hasnt impressed one bit. He would have been tempted to have a bit of a biff against Holland's unthreatening band of slow medium-pacers and spinners, but he restrained himself only to throw it all away. He got a duck against West Indies, chasing 86 for victory. 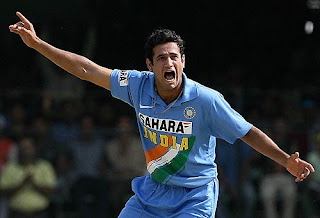 Then there's Irfan Pathan, who hasnt bowled anything out of the 105-115 kmh range. Against West Indies, he sprayed the ball around, overpitched to the extent that some balls bounced well past the stumps, and generally, appeared to do his cause no good. India have some worries.

There was plenty to look out for in the other warm-up games. Mahela Jayawardene needed runs, albeit against a minnow nation, to overcome his recent rut and get some confidence. He cashed in, as expected. Michael Vaughan and Kevin Pietersen just needed time at the crease; Vaughan got 62 against Australia, KP is still struggling. And then there was the curious case of Marlon Samuels, in his first at-bat since the match-fixing scandal broke in India recently.Samuels chose the Kenyan opposition to make a round 100, a firm statement give all that has plagued him in the past few weeks.

Bangladesh shocked New Zealand by two wickets, before the Kiwis came back to stop Sri Lanka in their tracks. The win was tarnished with the news that Peter Fulton had broken the little finger of his left hand in taking the catch. Injuries continue to plague the Cup.

On a dubious pitch at Trinidad's Frank Worrell Stadium, Pakistan beat South Africa by seven wickets. South Africa didnt like the treacherous nature of the surface - coaches Mickey Arthur and Bob Woolmer discussed the pitch with umpires Peter Parker and Ian Gould, causing a delay - but teams better get used to such unpredictable stuff in the West Indies.

None of the Associate members pulled any surprises, and wont going further.

And elsewhere, Australia rectified some issues with a five-wicket win over Australia.