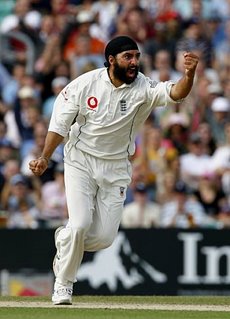 I've been harping on Monty Panesar's non-selection for the first two Ashes Tests, and today when he finally got a game, Monty gave me due reason to vent even more at the idiots who decided against playing him in Brisbane and Adelaide. Today, on day one at Perth, Monty took 5 for 92 on Ashes debut and became the first Englishman - and third spinner - to take five in an innings at the WACA.

He bowled in such a controlled manner, and was so effective, that you have no option but to wonder why he sat out in the first two Tests. Monty's two-fingered salute to Duncan Fletcher or Andrew Flintoff or whoever decided not to play him was superb. Just superb. This guy is a matchwinner to the core. How Ashley Giles, who missed a year with a dodgy hip, who's a containing bowler, was preferred over Monty is whack. He didnt get wickets, he didnt score runs, and he dropped the Ashes, in all probability.

Monty landed the ball in the right areas, spun the ball, teased, tempted, took some stick from Andrew Symonds, and finished the day as a hero. Look at a few of the wickets in his kitty: Justin Langer, Andrew Symonds, Adam Gilchrist. And the variety in wickets: Langer was drawn forward by a tossed-up teaser that pitched outside off and spun past his forward defensive to bowl him; Symonds was caught by Geraint Jones off an attempted cut; Gilchrist came forward to defend a beautiful, looped up delivery that cannoned off his pad onto his inside edge and then to short leg; Warne under-edged to Jones; and Brett Lee Lands came forward to one that landed on middle, turned just enough and was rapped on the pad. Great stuff.

He's got another innings to continue his magic, and though he won't taste Ashes success in his first such series, he will continue to spin it, capture your imagination, and if dropped, come back to stick in the idiots' faces.