"How did you get hooked onto cricket?" 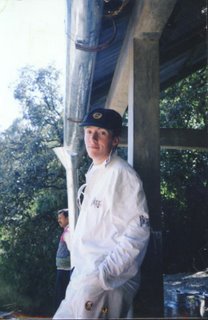 One of my American friends asked me recently when and how I got hooked onto cricket, and the answer to that question kind of hit me.
I realized: my love affair with cricket began about 15 years too late.

I was born and raised in , a country where the game – dare I call it that? – has turned millions into believers, hopeless romantics, and namesake scholars, and even more into passionate, sentimental and brainwashed procrastinators. To have spent the first 15 years of your life not even acknowledging the game, let alone watching a complete six-ball over and choosing not to follow the exploitations of one of the most dynamic teams in the sport, could be called heresy on all counts.

I was raised under the roof of a father who could possibly be the most honorable and dedicated symbol of what Indian cricket stands for, and yet through endless Sundays spent watching his team jaunt lazy singles and drop catches and listening to heated debates over selections and who was in the runs, never for a second did I choose to grasp what was unfolding before me. Perhaps that is why I never embraced the sport, for it was just all too prevalent in my life as an unwanted and overbearing houseguest.

I had been to the Wankhede Stadium with my father and Fred Wray, a rare American who came to love cricket, for a day’s play between the and back in the mid-eighties. I could not even tell you who was batting or what the score was. I remember ambling through our south Bombay flat wishing this blasted game between India and Pakistan would finish so I could watch an episode of ‘The Wonder Years’, not grasping that this was that same match in which Javed Miandad impersonated Kiran More by doing his now infamous ‘kangaroo’ leap.

All this changed when I went back to in 1995 and slammed head-first into the 1996 World Cup. Here I was exposed to cricket in a manner that had so far eluded me during years of studying at American schools full of rich, spoiled brats weaned on baseball and basketball. Suddenly the game was alive, with every one of my friends playing in the corridors and on the basketball courts and discussing whether Sachin or Mark Waugh would take their team to the finals of the competition. I did not know Mark Waugh from Micheal J. Fox, but had sat and had tea with Sachin and Sunil Gavaskar only two years before. Was this the same Sachin that Duncan Bailey and I had caught hanging outside our school building shyly waiting for his girlfriend? (Our school at the time was the bottom floor of the Mehta mansion, the same Mehtas whose daughter would later become Mrs. Anjali Tendulkar).The same kid that my father had dragged me to watch at some ground along Marine Drive when I was hardly seven or eight, telling me that one day he would be the face of Indian cricket? I knew that name, Sachin, but now I was hearing it being taken alongside the outcome of a game, and next to an unbeaten “century”, and I realized what this man was doing to a nation of fanatics.

I remember waking up early on a warm January morning when I was home for the winter vacations to watch the start of a one-dayer between and from the Carlton & United Series of 1997.

The raw, thirsty desire, whetted with intrigue and the feeling that I was treading where I had never gone before, to wake up and watch, from pitch report to post-match ceremony, a complete 50-over match was all to overwhelming. Sitting there on my bed, door sealed tightly so that no one could intrude on this first awakening of sorts, I remember being in awe of what my tiny B & W television set was relaying to me from . I can tell you that I predicted Anthony Stuart’s hat-trick – Ijaz Ahmed c Healy b Stuart, Mohammad Wasim c Healy b Stuart, Moin Khan c Taylor b Stuart – right before it unfolded, but then there was no one there with me on that magical morning to affirm my claim. This was the same match in which I first saw Shahid Afridi; no, he did not bludgeon Warne for successive sixes into the Ponsford Stand at the MCG – in fact, his contribution with the bat was sedate and almost mature: twenty-something in almost twice the amount of deliveries – but the sight of him running in to deliver one of his nippy leg breaks captivated me. I wanted to be like Afridi. Hell, I had the same hairstyle, why couldn’t I bowl a batsman through the gate and act cocky doing it? The stats box at the bottom of the screen showed his age – sixteen! – but even as Richie Benaud and Bill Lawry commentated on how young this kid was, something told me what the rest of the cricket world already knew: he was not sixteen. Yet the sight of Afridi running into bowl at Warne, locks flapping in the cool breeze, was enough to allow my mind to dream about doing the same. And Afridi even got Warne leg-before for 2.

I returned after that vacation raring to go, to try my hand at spin and slogging, and this new interest in cricket amused many. The spin did not go quite as I had envisioned it would, primarily because I did not the concept of what leg spin was. A few experiments with medium pace in-swing followed, but with little success, and so I settled for off spin, which surprisingly came easy to me. 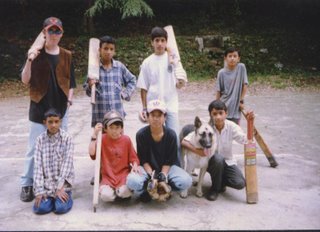 I cannot say the word ‘cricket’ without paying tribute to the smallest and shoddiest of tennis courts in the world, a ground so scarred by years of tumultuous monsoon downpours and the burdened soles of missionary keds engaged in epic tennis matches. The tennis court. Some day these same words will be remembered by a select few as the ground where they became men and where innocence made way for an unbridled acceptance of what they could do as cricketers.

Many an epic tennis ball cricket match has been staged at this little court nestled between pine trees in the Himalayas, where countless balls have been lost to the rolling hillside and those jealous weeds that waited with cupped hands for that fly ball of mistimed pull, only to be seen again the following year when the gardener hacked and sawed away at the shrubs and vines and unearthed a collection of faded green tennis balls. The same of the tennis ball fraternity could not have envisioned that his finely crafted creation for an elite pursuit would so mercilessly fall prey to a combination of lofted cover drives through the pines and negligence to maintain a small plot of land.

I can name you so many games, so many shots, so many catches, and so many stumpings from eight and ten-over encounters, but you had to be there to witness each for what it was. When I would bat, I was Sachin and Steve Waugh and Aravinda de Silva.

This game, this sport, this love affair has taken me to different grounds and allowed me to make some true friends. From Hansen Field at to a strip of dirt valley nestled in a valley in the middle of nowhere, to a small wicket tucked away in a lush green forest in to the grounds of a liberal Presbyterian university in the sprawling of the . Each ground has unfolded a different result and a different story, some unexpectedly positive and some crushingly difficult. But each was embraced with the same passion, and though the score lines may not have been on my side, the feeling of bowling to a different batsman and seeing different faces was always special to me. 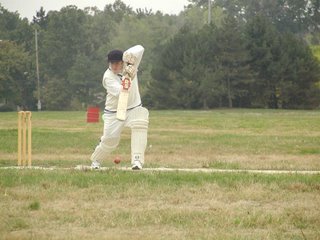 I have played with players of differing skills and differing intents, some distinct batsmen with a range of strokes and some who were there to simply hit the ball. There have been personality clashes and there have been arguments, some ugly, some childish. I’ve been hit out of the ground and into a dorm window, and I’ve clean bowled others. I’ve dropped sitters and been run out far too many times, but I’ve also captained teams to joyful victories. I’ve stayed up all night printing team logos and player names on white jerseys purchased in bulk from Wal-Mart, and I’ve stood in the morning mist and chill and seen the pitch in its naked reality. I’ve seen the welcome sun spread its rays over damp strips of clay and I’ve rolled others until my shoulders have ached. I’ve driven back from ‘away’ games listening to Springsteen and Junoon and shared laughs about catches dropped and wickets taken. I’ve cheered on teammates as both captain and twelfth man.

~*sim*~ said…
captivating post, bunts, both for content and for your smooth, stunning writing style. i really enjoyed reading it, and am looking forward to the rest!!
6:57 PM