South Africa has been, for a glaring majority of its return to international cricket in 1992, a team that has hovered below ’s greatness but choked when it really mattered. Much of what it has achieved turned into a climate of commingled grief and exaltation. For beneath the seeming sculptured wins of , , and , and home wins against every other side barring , there remained a disconcerting substratum of vulnerability when it mattered most.

A fine run in the 1996 World Cup ended in a dismal middle-order collapse against the innocuous spin of Roger Harper and Jimmy Adams in the quarterfinals; a 1-0 lead over Australia in the Carlton & United Series of 1997/98 ended in a 2-1 defeat; against Sri Lanka in the final of the Singer Triangular, the middle order collapsed to Muttiah Muralitharan; and in the first semi-final of the 2002-03 ICC Champions Trophy against India – ironically, the epitome of the word choker - South Africa were 192 for 1 chasing 262, but ended up losing by 10 runs.

And then there was that match. June 17, 1999, a blasphemy that will forever be etched in ’s checkered cricketing history. 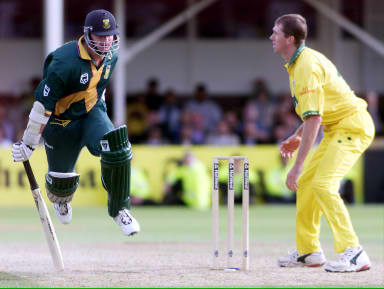 You know this one all too well. One run – yes, one run – to pull of an amazing win and entry into the World Cup finals, an ungainly pull, a fielder with 289 international catches to his name swooping in, a premature dash down the pitch, a bad call…..you know the rest. And this, four days after Herschelle Gibbs let Steve Waugh off the hook in what was the former Australian captain’s most crucial one-day hundred. They just didn’t learn, these South Africans.

Lance Klusener, the man who had carried his side to the semis, was never the same after his heartbreaking blunder, and herein lies an interesting parallel between the man and his team. It is well known that the belligerent hitter was a favorite of the late Hansie Cronje, but once the former captain fell from grace in the damning match fixing scandal, Klusener just lost his way, his batting average and strike rate falling, and by end of his career he was seen bowling gentle off-cutters. Like in crucial, series-deciding encounters, the will to win had just disappeared. Perhaps he was – and always will be – burdened by the fact that he could not take South Africa through in that thrilling semifinal, or maybe he was saddened and numbed that such a loyal figure let his country down.

Klusener’s was a difficult void to fill, and his decline summed up the state of affairs for a side desperate to overcome Cronjegate and the tag of chokers. Much has happened since Cronje’s exile and then death in a tragic plane crash. Racial quotas and bipartisan policies have seen an exodus to the , with disenchanted players turning their backs on to take advantage of European employment laws. The signs of discontent were evident since the mid-90s, although many believed that these cricketers would rally behind their nationality and draw cricket back into racial consciousness. The pendulum swung the other way.

These were frustrating times for those playing for , and a sense of cohesiveness and unity was lacking. The culmination of these anomalies was ’s campaign in the last World Cup, in which they were prematurely ousted after not taking their cricket – and Messrs. Duckworth and Lewis – nearly as serious as they should have. The selectors had seen enough, and made a bold move in picking Graeme Smith, then only 22, as national captain. 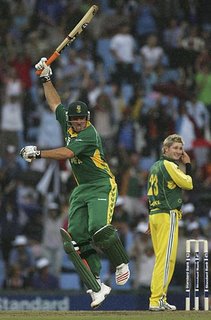 This was the singular defining moment of positivism post the Cronje era. Here was someone fresh, with no baggage, no legacy. It looked to many as if it could backfire, but to those who truly understood South African cricket, Smith’s appointment was redemption from the past. Smith has given his all to the captaincy, and despite brief hiccups, has batted with purpose and led with grit – despite the cusses of Stephen Fleming. He speaks his mind and wears his heart where all can see; not on his sleeve but on his chest.

Make no mistakes – this is a very professional South African unit. After dropping five in a row to last year, they have held their own against every other. In a summary of the of old, we need not look further than Klusener, who gave the impression of one burdened with the cargo of unfulfilled expectations, yet refusing to transform himself. Expectations can be a burden, but they can also be a great motivator. In the case of Smith, he has taken the brickbats on his broad shoulders and risen to the challenge of leading a team trying to dust from its own shoulders the remains of a past fraught with controversy and paranoia of the last hurdle.

ashwin john said…
South Africa's best oppurtunity to get to the standings they can potentially be will be a mystery with the team's history. Part of this could be the diminishing part of the board where they are run by political chaos rather than cricket. Unless there is a reformation in South Africa's board system, this team will struggle more and the endless chokes will go on
4:39 AM